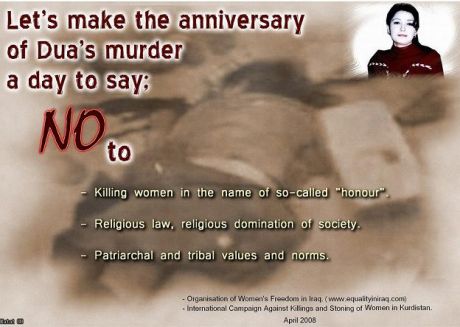 Representative Abroad of the Organization of Women’s Freedom in Iraq and the International Campaign Against Killings and Stoning of Women in Kurdistan will hold their first conference as part of a Week of Action initiative denouncing honor killings globally. The conference was dedicated to the memory of Du’a Khalil Aswad, a 17 year-old girl from a Yazidi faith in Kurdistan of Iraq, stoned to death on April 7, 2007

Maryam Namazie will be speaking at an Organisation for Women’s Freedom in Iraq conference in commemoration of Du’a Kahlil, the 17 year old girl who was stoned to death in Iraqi Kurdistan, and to denounce “honour killings” globally.

The high profile speakers are women’s rights activists, academics and experts from Kurdistan, Iraq, Iran, Sweden, New Zealand, and Britain and include:

Organisation of Women’s Freedom in Iraq