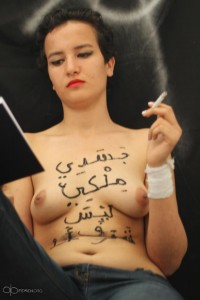 19 year old Tunisian Amina who posted a topless photo of herself bearing the slogan “my body belongs to me, and is not the source of anyone’s honour” has been threatened with death.

Islamist cleric Adel Almi, president of Al-Jamia Al-Li-Wassatia Tawia Wal-Islah, has called for Amina’s flogging and stoning to death saying Amina’s actions will bring misfortune by causing “epidemics and disasters” and “could be contagious and give ideas to other women…”