Protest against the executions of five political prisoners 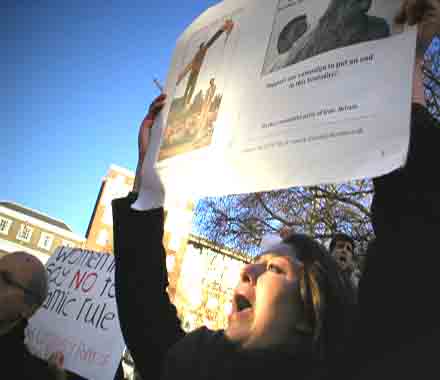 Protest against the executions of five political prisoners

Date: 13 May to 19 June 2010
From 13 May onwards join me in protest against the 9 May execution of the five political prisoners in any way you can. Protests have already been taking place in Iran and at Iranian embassies in various cities worldwide, including a successful general strike in Iranian Kurdistan on 13 May. You can join rallies taking place in your city; pass this information on; ask your friends to support the action; write letters of protest; write to the media; raise the issue at events you organise or attend and at your places of work, school and in your neighbourhoods; do acts of solidarity anywhere you can; volunteer; lend your expertise to make publicity materials, translate, fundraise…

Demand the expulsion of the regime from its seat in the UN’s Commission on the Status of Women, from the International Labour Organisation and other bodies.

Demand that its embassies and consulates be shut down. And call for an end to the death penalty in Iran and everywhere.