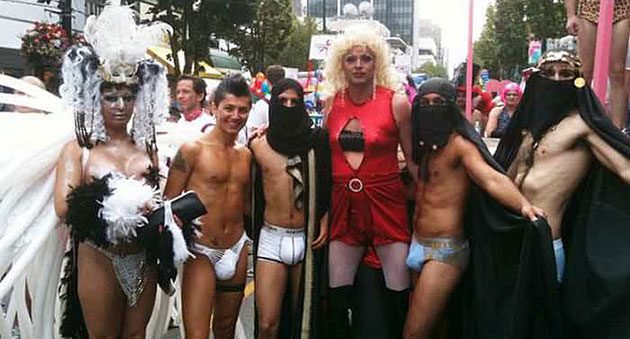 The below piece was first published in The Freethinker.

Iranian Shawn Shirazi and his group Cirque de So Gay were denied entry to the Pride Parade in Vancouver, Canada this year because their float criticising the veil was deemed to be ‘culturally [in]sensitive’.

In the application for Cirque de So Gay, he wrote:

Our entry in the 2017 Pride Parade will be visually stunning, while simultaneously encouraging dialogue about freedom of expression. We will be walking and dancing behind our pickup truck wearing black niqabs (ie the Islamic full-body covering plus veil).

At times we will be demure, with the niqabs wrapped around our bodies, but all that will change when, in perfect unison, we cast off the shroud of oppression to unveil the Persian Princess beneath.

The unexpected reveal will surprise and delight the parade audience, who will be enjoying the dramatic and infectious beat of our lively Middle Eastern music. Along the parade route, some of our participants will also be handing out wrapped candy, such as lollipops.

In the application, he asked the group to be introduced in this way:

Please welcome back the ever-popular Cirque de So Gay, focused this year on encouraging dialogue about individual freedom, and defying oppression so people can express themselves, as they choose, without the threat of being flogged, stoned, or beheaded.

The Islamic attire is more than just a piece of black fabric. It’s a tool used by governments to impose absolute control and authority over their citizens and even tourists.

Instead of hiding our true selves, we must cast off the shroud of tyranny to reveal the fabulous princess beneath – to shine our special light upon this incredible world where we live and love.

In the refusal letter, the Vancouver Pride Society simply wrote:

Upon review of your application and your proposed float activities, we are declining your entry for this year. The members of our Parade Working Group felt that the theme and activities proposed were not culturally sensitive. There are many people who choose to wear niqabs as part of their religious beliefs and do not feel that it is oppressive.

We really appreciate the creativity and encourage you to apply next year with a different theme.

Whilst the Vancouver Pride Society is trying to spin its abhorrent decision every which way possible on social media, its verdict is unsurprising and not unlike what has happened with the Council of Ex-Muslims of Britain’s entry in Pride in London this year (see Pride has the Chance to do the Right Thing) or attempts by “anti-fascists” to stop Iranian refugees marching at Pride Toronto prior to that.

It’s the “do-gooders” who only seem to do good for the Islamic regime of Iran and the Islamists and never the dissenters.

Everyone except the Vancouver Pride Society knows the veil has been imposed by brute force in Iran and for that matter in many places. But throw enough acid in women’s faces, beat enough unveiled or “improperly-veiled” women or imprison enough of them over decades as has been done in Iran and you will always find collaborators like those at VancouverPride Society saying “it’s your culture, shut up and enjoy the oppression.”

Of course, there are some women who like wearing the veil just as there are some gay men who willingly go to conversion sessions and exorcisms to become straight, but you don’t stop defending LGBT or women’s rights because there are those who have bought into the religious-right’s narrative and culture.

After all, culture isn’t homogenous. For every person defending the veil or therapies for “curing” LGBT, there are plenty of people opposing them and the Iranian regime’s “culture” imposed by brute force.

It’s a good thing the Vancouver Pride Society wasn’t around to tell the suffragettes demanding women’s right to vote or the black civil rights activists entering white only diners to end segregation to shut up and go home and be more “culturally sensitive”.

There were some whose culture it was to consider women and LGBT sub-human and others whose culture it was to demand equal rights. Unfortunately for Vancouver Pride Society, it has decided to firmly stand with the defenders of the veil (which implies that women’s bodies are so dangerous causing fitnah and chaos in society, thereby the need to conceal them), rather than those criticising and opposing the veil.

If the Society was around in the 1970s, what would they have told those organising Pride Vancouver? It’s people’s culture to be homophobic – “stop being culturally insensitive”, “shut up and go home and enjoy the oppression.”

If everyone listened to the likes of the Society, where would any of us be?

Yes, racism exists– and by the way, we refugees and migrants from Iran and the Middle East know that better than those sitting on the “Parade Working Group”. We all live it as we do sexism and homophobia and xenophobia but you can’t fight racism by ignoring misogyny and homophobia.

Vancouver Pride has done the Iranian regime proud and turned its back on those who it should be standing with.

It has a lot of explaining and apologising to do, including by making sure that Cirque de So Gay is there next year and with the same not “different theme”.

Editor’s note: The picture used to illustrate Maryam’s piece is a file photo of Cirque de So Gay, a group of mainly Middle Eastern gay and transgender men who marched in the 2011 Vancouver Gay Pride Parade, dancing and throwing off their niqabs to highlight the oppression of women in countries like Iran. 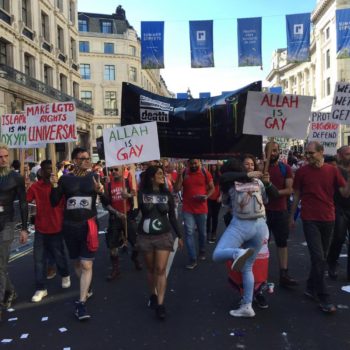 Fighting against Islam and Islamism 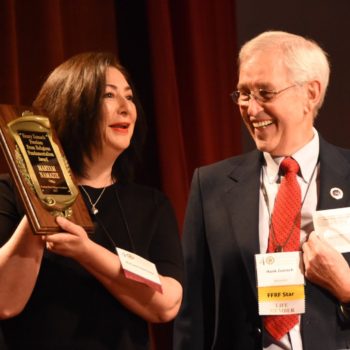