Following One Law for All’s statement on Channel 4 and the BBC’s censorship and blasphemy-law-by-stealth of a film adaptation of DV8 Physical Theatre’s “Can We Talk About This?”, they have issued the following statement entitled ‘Opposing Censorship’: Human rights activist Maryam Namazie recently posted a blog about the reluctance from Channel 4 and the BBC […]
Read More 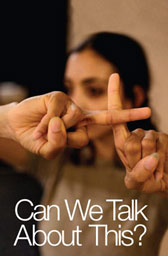 DV8 Physical Theatre ‘Can we talk about this?’ opens tonight

DV8 Physical Theatre’s ‘Can We talk about this?’ opens tonight at The National Theatre. You can buy tickets here. By the way, I’m a character in it. I’ll be going to see it soon too and will also be speaking at the NT Platform on 19 March with DV8 Director LLoyd Newson and Inayat Banglawala on […]
Read More
SUBSCRIBE