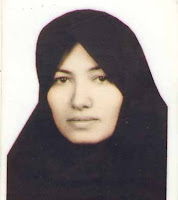 Citizens of the World against Stoning

We, the undersigned, are extremely concerned about the fate of 43 year old Sakine Mohamadi Ashtiani and fear she may be executed in Iran at any time for ‘having an illicit relationship.’

We call on people everywhere to intensify their protests by marking Saturday 24 July as the International Sakine Mohamadi Ashtiani Day. On the Saturday, we ask you to come out on to the streets and in city centres across the globe at 2pm local time bringing photos of Sakine and messages in her defence and against stoning and execution. Other measures that can be taken include highlighting her case wherever possible, signing petitions here, here and here, joining rallies, and keeping pressure on the Islamic Republic of Iran.

The mother of two has already received 99 lashes and been sentenced to death by stoning. Sajjad, her 22-year-old son, who raised the alarm of her imminent stoning when there was no further legal recourse via an open letter to the people of the world and said ‘there is no justice’ in Iran has been summoned to the Ministry of Intelligence for his brave efforts to secure his mother’s freedom.

As a result of the public outcry, the embassy of the Islamic Republic of Iran in London has issued a press release stating that the regime did not intend to stone her, that stoning in Iran was rare and that there was no truth to the reports. Her lawyer, however, has made it clear that ‘Iranian embassies are not a part of the judiciary system, and it is the judiciary which should cancel this sentence.’ Rather than being rare, a new report has found that over 100 known stonings have already taken place and another 25 known cases await death by stoning in Iran. Since the global protests, families of others held in Tabriz prison have come forward with news of 170 people sentenced to death, including children, youth, and 18 men and women for being gay. Two other women also await death by stoning in the same prison including Azar Bagheri who was 15 when she was arrested and 25 year old Maryam Ghorbanzadeh who is currently pregnant.

On 24 July 2010 at 2pm join us and make the world stand still in its rage against medievalism and barbarity and in its support of humanity. Sakine, her children and the many others awaiting death by stoning and execution deserve nothing less.

1. The new and comprehensive list of persons stoned to death or awaiting death by stoning in Iran compiled by Farshad Hosseini of the ICAE is available in Persian. It is being translated into English.

2. See a 17 July article in the Times calling for the eviction of the Islamic Republic of Iran from the UN Commission on the Status of Women.

Eject Iran from UN Commission on the Status of Women

It's a crime to be a woman in Iran