Mansoor Hekmat’s name will endure through the ages

Mansoor Hekmat’s name will endure through the ages 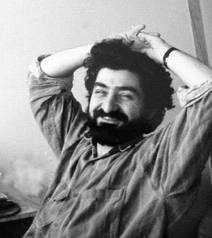 My beloved Mansoor Hekmat died on 4 July 2002 and so I believe it is important to pay tribute to him on this day.

It is no exaggeration to say that I still think of him all the time.

I don’t think anyone has had such a profound impact on my life. And it’s not about hero worship though he is truly my hero.

He once said that society seeks out its Left and holds its Left in high esteem because it needs justice, and so it is that I and entire generations in Iran and the region in particular have sought him out and hold him in the highest regard.

It’s because we need justice. We demand it.

Engels’ speech at Highgate Cemetery on March 17, 1883 about Karl Marx rings true about Mansoor Hekmat as well. He said: ‘An immeasurable loss has been sustained… The gap that has been left by the departure of this mighty spirit will soon enough make itself felt… He died beloved, revered and mourned by millions… His name will endure through the ages, and so also will his work…’

Here is a link to his works.

On 'improper veiling' and women's resistance

Update on One Law for All