To see Mina Ahadi and Maryam Namazie’s interview in Persian with Voice of America on the 30 July press conference and Sakineh Mohammadi Ashtiani’s case, click here or see below:

Some of the other press coverage of the press conference: 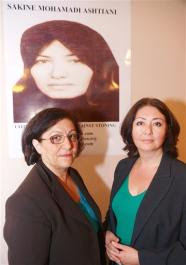 Iran Stoning case asks to be reunited with her children, The Guardian, 30 July 2010