Sakineh an honorary citizen of Venissieux

Sakineh an honorary citizen of Venissieux

The town council of Vénissieux, a municipality in the suburbs of Lyon (France), decided to make Sakineh Ashtiani an honorary citizen of Vénissieux.

In a ceremony on Friday 5 November the town council adopted the motion to support Sakineh Ashtiani and against stoning in Iran. The town’s mayor Ms Michèle Picard wrote a letter in which she said that the motion is also for “all this girls and women who are suffering in silence” and added “Sakineh is the symbol of all the women who are victims of violence. Tens of thousands of them are every year subjected to psychological and physical torture or to stoning, their freedom and dignity are in danger every day. Their wish to resist and to live freely is strong but without the support of international solidarity their hope can be broken”.

Translation of the motion :
“MOTION SAKINEH MOHAMMADI ASHTIANI – HONORARY CITIZEN
Considering the risk of stoning that Sakineh Mohammadi Ashtiani is facing ;
Considering that the death penality should be abolished in the 58 countries where it’s still being practiced ;
Considering that stoning is a barbaric act, that cannot be justified by any reason, that it’s a crime against humanity that should be abolished everywhere and forever ;
Considering that Sakineh is a victim of the violation of womens rights and that she is the symbol of all the women who were stoned or who are in danger of being stoned, victims of oppression, segregation and discriminations ;
Considering the wave of global solidarity that is necessary to save Sakineh and all the others who are threatened by stoning ;
The Town Council decide :
– To support actions to demand her freedom
– To support actions against stoning
– To make the commitment of the town known to its fellow citizens by all useful means: municipal publications, internet page of the town, meetings…
– To make this information known to :
— The ambassy of Iran in France
— Nicolas Sarkozy, President of the Republic
— Organisations and associations who are acting for Sakinehs freedom

The motion in its French original 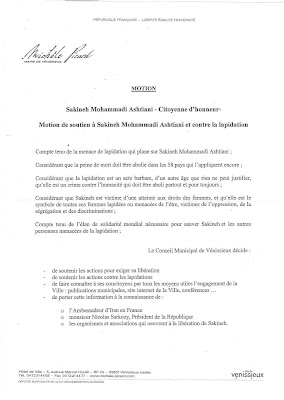