The outrageous executions of brothers Abdullah and Mohammad Fathi

The outrageous executions of brothers Abdullah and Mohammad Fathi 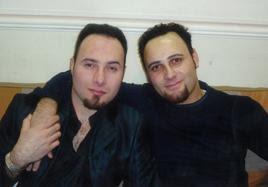 On 18 May hundreds of people went to pay respects to the mother and spouses and families of the two brothers executed on 17 May. Mohammad and Abdullah Fathi, aged 27 and 28 years old, were hurriedly executed as Moharebeh [Waging War Against God] in Isfahan in the early hours of the morning by the slaughter house that is the Islamic Republic of Iran.

Hear their mother’s heartwrenching plea (in Persian) to save their lives a day before they were executed:

Hear Mina Ahadi’s brilliant piece (in Persian) in defense of the two brothers and against executions and the ‘reformists’ that excuse their cold-blooded murder:

Here is an interview with the brilliant Hamid Taqvaee against executions and also the judicial system in Iran (in Persian):

Muslim music artist and activist speaks out against honour killings

And they say only Islam is anti-woman...