To the brave and revolutionary people of Syria

To the brave and revolutionary people of Syria 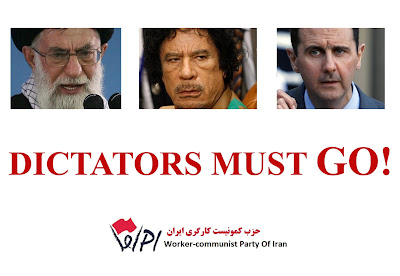 Your brave struggles with one of the most brutal repressions and regimes of our time have aroused admiration and solidarity in the people of the world. The people of Iran follow, however, with more enthusiasm and care of the attempts of Syrian women and men to get rid of Bashar Al-Assad’s regime and the criminal ruling clique in Syria, since the regime of Syria is allied with the Islamic regime of Iran and the overthrow of either of them would cause a wave of happiness and success, in particular, among the oppressed people of these two countries.

Let me on behalf of the people of Iran, state that was in fact vanguard of the heroic revolutions in the countries of North Africa and Middle East by raising up against the Islamic regime in 2009, express my solidarity with you, the revolutionary people of Syria. We and the people of Iran condemn strongly appalling crimes of al-Assad’s regime and the army against you and are firmly standing by your side. We are all aware of the fact that the Islamic regime of Iran has done all that was within its power, and still is doing, to maintain al-Assad’s bestial regime and support criminal Islamic currents, like Hamas and Hezbollah. We have always condemned the axis of crime and terror, headed by the Islamic Republic of Iran, and supported the struggles of the people of Palestine under the ruling of Islamic criminal gangs.

We believe that either in Cairo and Damascus or in Baqdad and Tehran or in Athens and Madrid, people have common interest and must be released from clutches of capitalism and dictators. So when you, under the fire of guns and tanks of Al-Assad’s regime, set fire to the flag of the Islamic Republic of Iran, you are at the same time speaking the Iranian people’s mind! To the extent that your revolutionary struggle would pull up the roots of dictatorship, reaction and rightlessness in Syria, that you would advance in establishing freedom, equality, welfare, and a secular state emerged from the revolutionary people’s will, to the same extent you would strengthen the struggles of the masses of people elswhere.

Here, I would like to take the opportunity to call upon the Iranian freedom-loving people abroad to express in every way their solidarity with the liberating struggles of the people of Syria, to enter the scene in defence of the Syrian revolution, and to condemn the atrocities of the regime of Syria against the people and the colaboration of the Islamic regime in bloody repression of the people of Syria. Showing an ever greater solidarity with the people of Syria would be at the same time a crushing response to the Islamic regime, its Syrian allied, and all those governments which openly or secretly supporting maintenance of al-Assad’s regime. Worker-communist Party of Iran, on its part, will work for strengthening of this solidarity.

On behalf of members and supporters of the Party and all those that are struggling for overthrow of the Islamic regime in Iran, I send our compliments to you, the heroic people of Syria, and eagerly wish you victory in your struggle for overthrowing al-Assad’s regime and in your cause.

Asqar Karimi
On behalf of
Worker-communist Party of Iran
June 23, 2011