Why are you so afraid of women?

Why are you so afraid of women? 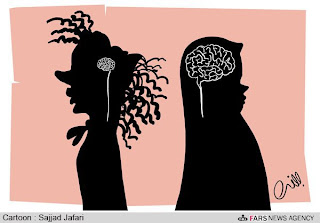 The despicable Fars News Agency has printed yet another misogynist cartoon against unveiled women. This is part and parcel of the pressures exerted on women and girls in Iran day in and day out. Anti-woman propaganda, coupled with threats, arrests, fines and brute force by the Hezbollah herds of the Islamic regime of Iran are the order of the day. Even though veiling is compulsory in Iran, ‘improper’ veiling and the removal of the veil are widely used forms of protest.

And every day the regime issues new directives to push women back into the private sphere. (What wishful thinking!) Recently the regime announced that women could no longer enter tea and coffee rooms. Here’s a sign posted at one such place: 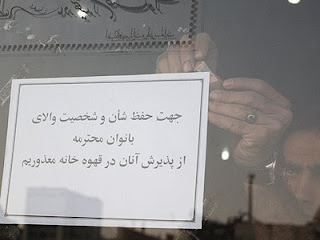 No matter how much the regime tries to push back the unfolding revolution in Iran, which is very much a female-led one, it just can’t manage to do so. This movement is bringing the regime to its knees.

In this wonderful song of Algerian women’s protest against Sharia, they ask: Judge, Why are you afraid of me?
The resistance of women in Iran and elsewhere shows exactly why the regime and Islamism are afraid of women…

And the pro-Islamists have the nerve to say the veil and Sharia law is ‘our’ culture!

Sharia Law is a code of despair; a code obsessed with women