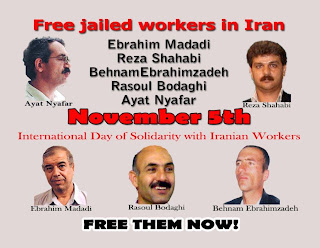 The attack on labour activists must be stopped!

We demand:
• the immediate and unconditional release of all jailed workers in Iran
• the expulsion of delegates of the Islamic regime of Iran from International Labour Organisation (ILO)

We call on all trade unions, concerned organisations and individuals to join us in this campaign. We need to show our solidarity with these jailed workers and their families.

FOR A FREE AND SECULAR MIDDLE EAST AND NORTH AFRICA

Political Islam’s and misogyny’s hands off the people of Libya!