The 25 November International Conference on Sharia, Segregation and Secularism in London celebrated the 10th anniversary of the founding of the One Law for All campaign in the UK.

The conference was a landmark event in the fight against all forms of fascism and in defence of universal rights and secularism with leading activists in the fight against the far-Right – including religious fundamentalisms of all stripes – from 24 countries and the Diaspora, including Algeria, Bangladesh, Europe, India, Iran, Iraq, Italy, Kurdistan, Morocco, Pakistan, Poland, Russia, Serbia to Sudan, Tunisia and the United States.

In her welcome address, Conference Organiser Maryam Namazie reiterated how women are the first targets of fascist, fundamentalist and other far-Right movements and are leading the opposition to the sustained backlash against women’s rights and secular values – and in many cases continue to win victories in the most adverse circumstances. She stressed the urgency of secularism as a minimum precondition for women’s and minority rights.

Centre for Secular Space Director Gita Sahgal’s opening keynote address emphasised the precious heritage of the Universal Declaration of Human Rights noting that Indian and Pakistani women fought for the clause on right to choice in marriage – the foundation for many struggles taking place on family laws and equality in marriage today. Muslims from Pakistan and India also voted for the right to religious freedom, including the freedom to leave religion.

Asia Bibi’s lawyer Saif Ul Malook spoke about the Asia Bibi case in his keynote address. As mentioned in a DW report on the conference, Ul Malook spoke of the Pakistani constitution and its secular credentials and his childhood when Christians and Muslims lived peacefully together in Pakistan and how a minority are behind the intolerance seen today. He was given a standing ovation for his courage in defending Asia Bibi and prosecuting Mumtaz Qadri, the man who murdered Salman Taseer.  Ul Malook said he had no regrets.

The Conference passed a resolution in solidarity with Asia Bibi and her lawyer and the Judges who had the courage to strike down her conviction for blasphemy, called for asylum for Asia Bibi, the release of all those imprisoned for blasphemy and an end to blasphemy laws everywhere.

The film 3 Seconds Divorce by Shazia Javed about the struggle against triple talaq in India, had its UK premiere at the conference. On a panel discussion that followed, campaigners gave examples of similar practices in Britain. One Law for All had criticised the ‘theological inquiry’ into sharia law in Britain that the government had established and raised concerns about how the British government has effectively caved into religious lobbies by recommending that marriages may require a religious as well as a civil divorce, giving Islamists the green light to establish community-based ‘zina law.’ Women’s rights campaigner Yasmin Rehman explained this was not the historic practice of Muslim communities in Britain. Rights activist Afsana Lachaux pointed out that while she won a victory in France where a Judge set aside decisions made by a UAE Sharia court regarding custody of her son, the English court accused her of ‘demonising’ Sharia law.

In various other panels on Gender Segregation, the Veil and Women’s Bodily Autonomy and Secularism as a Defence of Women’s and Minority Rights, activists spoke about the far-Right marching against migrants on the one hand and against women’s rights on the other from Russia to Poland to the US and South Asia.  Polish feminist Nina Sankari described rise of far-Right militias in Poland; Freedom from Religion Foundation Co-President Anne Laurie Gaylor warned of the takeover of the courts by the religious-Right with grave implications for the future. Italian journalist Cinzia Sciuto argued that universal rights were a better way to ensure migrants’ rights than to entrench multi-cultural practices that left them at the mercy of homogenised communities. Eve Sacks of the Jewish Orthodox Feminist Alliance gave examples of extreme isolation and erasure faced by Jewish women in ultra Orthodox communities, where literally all images of women and girls are excised and women are forced to shave their hair and cover with a wig and or a hat. She called for support in the campaign for sex and relationship education to be applied to religious schools.

Staša Zajović reminded the audience that religious revival was on the main tools for an aggressive nationalist politics which caused the genocidal war in former Yugoslavia. The irreligious feminists who worked across the conflict and took care of victims of all backgrounds were called ‘internal enemies’ or ‘witches,’ and faced numerous attacks.

The importance of direct action was reiterated by Inna Shevchenko of Femen who argued that religious patriarchies found women’s bodies ‘sinful, dirty, guilty and always shameful,’ and Ibtissame Betty Lachgar of Morocco, who described living under a monarchy that claimed descent from Muhammed, Islam’s prophet, and turning fountains red to challenge violence against women, organising ‘kiss-ins’ and eating in public during Ramadan. These activities were dangerous and brought legal and other threats.

There was also considerable good news. The Rojava movement which had confronted ISIS and in the middle of war, protected refugees and developed women’s leadership was remembered by Culture Project Founder Houzan Mahmoud who added that secularism alone was not enough, rather a transformation of society was needed. Campaigner Homa Arjomand recalled the successful struggle against the recognition of Sharia courts in Canada and Filmmaker Nadia el Fani reported on the adoption of equal inheritance rights in Tunisia in the face of opposition from the government. The struggle against ‘Triple Talaq’ reflected women’s struggles for equality across the world.  The One Law for All campaign also won a number of victories forcing regulators to abide by their responsibilities- see timeline for victories against the Law Society and gender segregation at universities and schools, amongst others.

At the Conference, a short film by Iranian performance artist Atoosa Farahmand in support of White Wednesdays, was followed by a protest action by body painter Victoria Guggenheim in support of the Girls of Revolution Street and against compulsory veiling. Women and men present all raised white hejabs and raised their voices against forced veiling.

Artist Mahshad Afshar also had a solo exhibition to showcase her “Cursed Seal” Photography collection. There was a dance performance by LCP Dance Theatre.

One Law for All gave awards to Afsana Lachaux, Annie Laurie Gaylor, Gita Sahgal, Houzan Mahmoud, Ibtissame Betty Lachgar, Inna Shevchenko, Masih Alinejad, Marieme Helie Lucas, Nadia El Fani, Nina Sankari, Pragna Patel, Staša Zajović and Yasmin Rehman for their immense contributions to the cause of women’s rights and secularism. The awards were sculpted by Sodabeh Gashtasebi and was a likeness of Vida Movahedi who first stood on a plinth on Revolution Street in Iran waving her white hejab on a stick.

In her closing keynote address, Pragna Patel of Southall Black Sisters warned of the rise of fascism all over the world, and recalled Southall Black Sisters stand against blasphemy laws and in defence of Salman Rushdie, nearly 30 years ago. The need to oppose both racism and fundamentalism within a framework of secularism has never been more urgent.

The conference adopted a Ten Point Manifesto for Women and Secularism which recognised that the far-Right, including religious fundamentalisms, was gaining power in both authoritarian and democratic states and that its strength was due to the complicity of governments who see fundamentalists as allies to deliver services, post-conflict ‘stabilisation’ and privatised law. The Manifesto acknowledged that universal rights were won in the struggle for civil rights, liberation and against colonial occupation and called for the promotion of a universalist based approach to human rights, the right to free conscience and expression, abolition of religious-based laws in family, civil and criminal matters, prohibition of gender segregation and compulsory veiling, prohibition of religious laws that violate children’s rights, the need to counter both racist and fundamentalist discourse, and secularism as a basic human right, amongst others.

The conference ended with “This is our Resistance,” a new song by Singer/Songwriter Shelley Segal inspired that very day by the women’s rights activists present.

Fariborz Pooya and Nahla Mahmoud were Master of Ceremonies. The Organising Committee were Maryam Namazie, Sadia Hameed and Sina Ahadi Pour. The Conference was sponsored by Bread and Roses TV; Center for Inquiry; Centre for Secular Space; Council of Ex-Muslims of Britain; Culture Project; European Network of Migrant Women; Equal Rights Now; Fitnah; Freedom from Religion Foundation; National Secular Society; One Law for All; Southall Black Sisters and Secularism is a Women’s Issue. 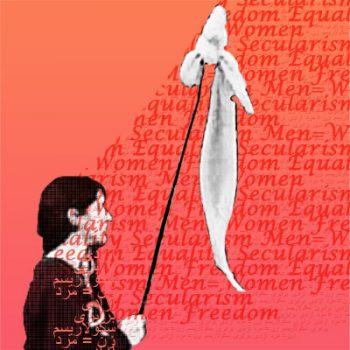 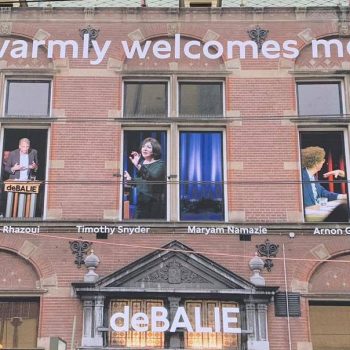