A year after the world was stunned by images of a 17 year old girl being stoned to death in Iraqi Kurdistan; an international panel will debate the rise of honour killings, violence against women, gender apartheid and political Islam in Kurdistan/Iraq and the Middle East.

The high profile speakers are women’s rights activists, academics and experts from Kurdistan, Iraq, Iran, Sweden, New Zealand, and Britain and include:

For more information and to confirm your attendance please contact the organiser: Houzan Mahmoud Tel: 07534264481

Here is a picture of the event: 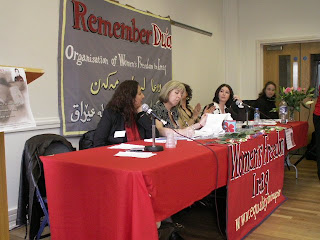