Azar Majedi of the Organisation of Women’s Liberation – Iran has attacked the Nude Photo Revolutionary Calendar and supporting video of Iranian women as being similar to the tabloids (namely the Sun’s page 3), ‘dim-witted idiocy’ and ‘buffoonery’ and Golshifteh Farahani’s nudity as ‘commercial’ whilst supporting Egyptian blogger Aliaa Magda Elmahdy’s nudity. In her attacks in Persian and English, she has characterised the calendar and supporting video as ‘absurd caricatures’ of Aliaa’s nudity.

Her attack is a masterpiece in dishonesty, hypocrisy, and regressive politics. Let me explain.

Whilst Islamists often portray their vile politics as a prescription for the debasement of women in western societies (i.e. against the Sun’s page 3), their image of women is very much the same as the pornographic one. Ironically, Azar’s ‘arguments’ against the calendar reveal a deep-seated disdain for female nudity not very different from the tabloids and rooted in the religious/Islamist point of view she claims to oppose.

Clearly, when you are faced with an Islamic movement that considers you to be worth half of a man and demands that you be bound, gagged, veiled, and segregated, then nudity becomes an important form of resistance and dissent as well as solidarity.

Nudity is the antithesis of veiling. Of course it is not the only way to resist Islamism and the veil but it is a very modern way of doing so. Islamists want us covered up, hidden, and not seen and not heard; we refuse to comply.

But nudity is not just a protest against Islamism and religious misogyny. It is fundamentally a protest against discrimination, the commodification of women, and the religious and chauvinistic culture built upon it – which is why it is on the increase and has been a part of the women’s liberation movement for some time.

Commodification relies on an objectified image that is separate from the reality of women’s bodies, minds and lives. This image is used to regulate, control and suppress. And this is what religion and pornography share, albeit in different forms. The actuality and frankness of women’s bodies as a form of protest challenges and upsets both.

Despite its significance, Azar insists that the calendar is not revolutionary. Whilst the calendar uses the same hashtag Aliaa used to Tweet her nude photo, it is also in and of itself a revolutionary act – not merely because women were involved though that fact is key. It is revolutionary because it challenges the religious/pornographic view of women’s bodies and reclaims a tool used for women’s suppression. Nudity outrages and offends because of this very challenge.

And it is taboo-breaking in the most progressive sense of the word since progress often comes as a result of offending deeply held and misogynist views and sensibilities. What makes nudity radical and progressive is also that it gives a practical response.

Azar says that nudity only matters if done in a place like Egypt, where threats are real, and male chauvinism deeply-rooted though she knows full-well that one does not have to live in the Middle East and North Africa to face Islamist threats and that male-chauvinism and the commodification of women is deeply-rooted everywhere. Even in a majority of western countries, women still cannot appear topless in beaches or parks as can men. Breastfeeding in many public places is considered taboo. This gives the nude protests universal significant. And threats or no threats, in Egypt or the west, isn’t the point of international solidarity to bring people closer despite any differences?

Azar trivialises acts of solidarity in the same way that she trivialises nudity. Occupy Wall Street takes on the form and content of Tahrir Square so why not nude protests? In fact, the material basis of the protests, including nudity, are similar.

Azar fails to see the importance of nude protests addressing deep-rooted discrimination against women because she doesn’t see the deep-seated discrimination in the first place. And like the tabloids and Islamists, our ‘veteran’ friend has such disdain for nudity that she cannot begin to understand how deeply humanising, revolutionary and taboo-breaking it is… 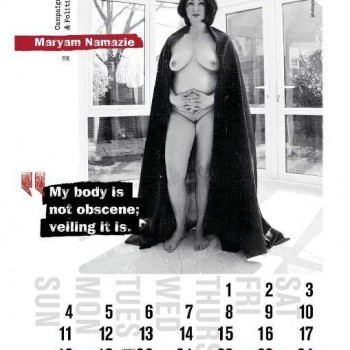 Seriously, we are intolerant!?