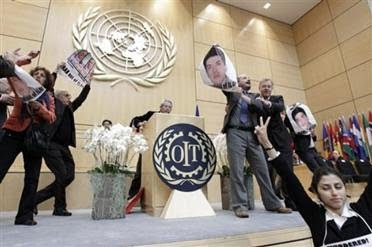 Members of the Worker-communist Party of Iran staged a powerful protest at the opening session of the International Labour Conference last Wednesday in Geneva , calling for the expulsion of the Islamic Republic of Iran from the ILO.

Raising pictures of Farzad Kamangar, which carried the words: ‘Murdered, Iran out of ILO!’, as well as posters of jailed workers Osanloo and Madadi, six WPI protesters climbed onto the main stage at the sounding of the opening bell. The action, which lasted for around two minutes, was greeted by applauds from the delegates. (See footage here) Later, a banner reading ‘A regime which executes trade unionists and political prisoners should not be in the ILO. Iran out of ILO!’ was unfurled by a WPI member from the press gallery. (See footage here)

This was the fourth action of its kind at the ILO’s annual conferences by the Worker-communist Party of Iran in the past few years. This year the ILO had gone to great lengths, with extra security measures, to keep protesters out of the UN compound. It is ironic, and a scandal for the ILO, that meanwhile a regime which murders trade unionists and political prisoners is let in as an official guest with full credentials.

Trade unions from across the world, and specifically the global union Education International, had been campaigning for years for the release of Farzad Kamangar, and vehemently condemned his execution in early May. It was no surprise, therefore, that the delegates should break into loud applause the moment Farzad’s pictures went up on the stage. It is remarkable, and indeed unprecedented, that the participants and protesters at a conference find themselves on the same side, while the organisers are isolated and shamed, along with the group that is the object of the protest.

Later, a rally was held at the nearby Place des Nations in protest at the attendance of the regime of Iran at the conference.

The campaign for the expulsion of the Islamic Republic of Iran from the ILO continues. Already a number of locals of the French CGT union have taken up the call in the form of a petition that is circulating among the union branches. The disgust and anger felt by the world’s trade unions towards the regime of Iran for its callous murder of Farzad Kamangar and the horrific abuse of human rights should translate into a clear call for the expulsion of this regime from the ILO.

The International Labour Conference in Geneva is in session until 18 June. We urge trade unions from across the world and specifically their delegates participating at the conference to protest against the attendance of the Islamic Republic of Iran and to boycott that regime’s delegation. Above all, we urge them to take up the call and join the campaign for the expulsion of the regime of Iran from the ILO. A UN body purporting to promote global labour rights and welfare is no place for a regime which murders trade unionists and represses a people.

You can find more information here and here.

International Labour Solidarity Committee of the Worker-communist Party of Iran

Atheism in the 21 century