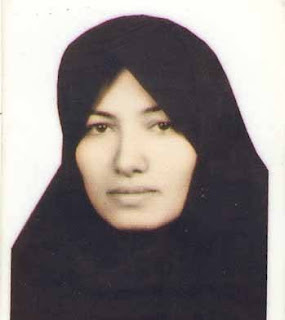 Moreover, her well known human rights lawyer, Mohammad Mostafaei, is in prison in Turkey after having fled the country to evade arrest for his advocacy work. His wife remains in prison in Iran – held hostage – until he is remanded into the regime’s custody. Given Turkey’s close relations with the Islamic Republic of Iran, Mostafaei can face deportation back to Iran even though he has applied for refugee status with the United Nations High Commissioner for Refugees there.

Campaigners are concerned about the safety of Mostafaei and his wife. We are also extremely concerned for Ashtiani’s life. The regime may be preparing to execute her within the next few days, particularly given that the Tabriz prosecutor has demanded her execution and is awaiting the Tehran high court’s confirmation.

In her most recent heart-wrenching message, she says:

“I am now quiet and sad because a part of my heart is frozen.

The day I was flogged in front of [my son] Sajjad, I was crushed and my dignity and heart were broken.

The day I was given the stoning sentence, it was as if I fell into a deep hole and I lost consciousness.

Many nights, before sleeping, I think to myself how can anybody be prepared to throw stones at me; to aim at my face and hands? Why?

I thank all of you from Tabriz Prison.

Mrs [Mina] Ahadi, tell everyone that I’m afraid of dying. Help me stay alive and hug my children.”

As a result the public outcry, Brazilian president Lula da Silva has offered Ashtiani asylum there. Ashtiani has accepted the offer. The regime, however, has rejected it and continues to push for her execution and to disseminate misinformation on her case. It says it intends not to stone her but to execute her for murdering her husband. At the 30 July press conference in London, Mina Ahadi exposed the regime’s misinformation on the case and revealed court documents showing Ashtiani’s sentence of death by stoning for adultery. [In fact, she was acquitted of any murder charges; even those found guilty of murdering her husband have not been executed at the request of the victim’s family.]

At the 30 July press conference, Maryam Namazie also refuted claims made by the embassy of the Islamic regime of Iran in London and the former French ambassador to Iran that stonings in Iran were rare; she referred to a new report published by the International Committee against Executions which has found that over 100 people have been stoned with 25 known cases currently awaiting death by stoning in Iran. Other speakers at the press conference AC Grayling spoke of the contradiction between a medieval government and a progressive population wanting to be free whilst Peter Tatchell stressed the importance of supporting Sakineh and all those languishing on death row.

Given the imminent risk of execution faced by Ashtiani and the insecure status of her lawyer in Turkey we urge the public to act now.

1- Send Sakineh a postcard of the city you live in or are visiting this summer telling her you are thinking of her and other prisoners on death row in Tabriz prison. You can address it to:
Sakineh Mohammadi Ashtiani
Tabriz Prison
Tabriz, Iran

2- Write letters of protest to the Islamic regime of Iran demanding Ashtiani’s release and an end to stonings and executions. Protest letters can be addressed to the below:

3- Sign petitions in support of her case if you haven’t already done so. Here are two of them: ICAS, Avaaz.

4- Write to government officials, heads of state, MEPs and MPs in your country of residence calling on them to intervene to save her life and to cease recognition of a regime that stones people to death in the 21st century. See Mina Ahadi’s recent letter to heads of states on this.

5- Write to the Turkish government asking them to release Mohammad Mostafaei and to the United Nations High Commissioner for Refugees in Turkey urging them to grant him refugee status and expedite his resettlement to a safe third country.

* See clip of Islamic Republic’s state TV’s misinformation on the 24 July International Sakineh Mohammadi Ashtiani Day protests we organised and Ashtiani’s case. The regime blurs out her face, uses only her initials and says she was sentenced to execution for brutally murdering her husband. A translation of the court document sentencing her to death by stoning for adultery is available here which refutes their statements on her case.

Mohammad Mostafaei’s wife, Fereshteh Halimi has been released from prison