Iran: we must get the jailed sugar cane workers freed

Iran: we must get the jailed sugar cane workers freed 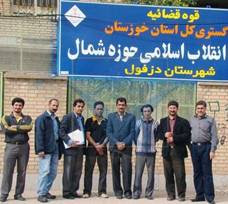 Ali Nejati, president of the union of Haft Tappeh sugar cane workers, today became the fifth worker to start a six-month jail sentence at Dezful Prison in Iran. He joins his colleagues Fereydoon Nikoofard, Jalil Ahmadi, Ghorban Alipoor and Mohammad Heydari, who were detained and imprisoned earlier this month.

The jailings come after a long and bitter fight by the sugar cane workers over months of unpaid wages and for the right to set up their union.

In the days leading up to today’s summons’ deadline, Nejati issued several letters on behalf of sugar cane workers and his jailed colleagues calling for support by workers in Iran and internationally.

“While employers can freely organise, workers who set up their independent organisations are prosecuted and put in jail”, said Nejati in his letter dated 7th November. “Today is the day to support workers who fought in Haft Tappeh for workers’ rights, and who were elected by Haft Tappeh workers to represent them in an independent organisation. No doubt tomorrow and in future when we are out of prison we will do our share in this workers’ duty”.

In a statement on Saturday, the Free Union of Iranian Workers reiterated Ali Nejati’s call for support for the jailed sugar cane workers and their families (Read the full text of the English translation here: www.kargaran.org).

We must get these workers freed! Thrashed by months of revolutionary protests of the people, the regime in Iran is in its most vulnerable state ever. It cannot and should not be allowed to continue with its usual brazen acts of worker persecution, and must be driven back. Your solidarity is needed more than ever. Please publicise the news about these jailed workers and help in whatever other ways you can to get these workers freed. We can get them freed!

You don’t need to know Arabic to oppose Sharia