Iran: Workers and families march on 13th day of strike

Iran: Workers and families march on 13th day of strike 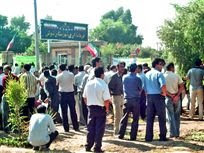 Thousands of Haft Tapeh sugar cane workers marched today through the town of Shush on the 13th day of their massive strike. The marchers, numbering around 3,000, were joined along the way by the people of the town, swelling their ranks to 5,000, according to a report received by WPI.

After first gathering outside the Governor’s Office at 8.00 a.m., they then marched, together with their families, towards the city centre. The slogans included: “Livelihood and dignity is our certain right”, “Legal cases must be closed”, “Head of security must be fired”, and “Haft-Tapeh workers are hungry”. Around 11.30 a.m. the security forces attacked the marchers with tear gas. Two workers are reported to have been taken to hospital injured, one of whom has been kept in the hospital.

The sugar cane workers, who have been on strike since 11th May, are demanding the payment of two months’ overdue wages, dropping of the threatened legal actions against worker activists, which are based on fabricated charges, resignation of the director and management of the company, and the firing of the head of the factory security who has played a particularly vicious role in persecuting workers. Five workers have been summoned to appear before court next Tuesday, 20th May, which the workers have said they will fight to revoke. This is the third strike by sugar cane workers in the past year.

A march by around 2,000 workers on Thursday was also attacked by the security forces, resulting in five injuries. Some family members of the workers described the brutality of the police in interviews to international radio stations.

At the end of today’s march, the workers said they would march again Sunday.

International Labour Solidarity Committee of the Worker-communist Party of Iran