Below are some pictures from the demonstration at Daneshjoo park which was brutally attacked by the Islamic regime of Iran’s security forces with numerous women being arrested. 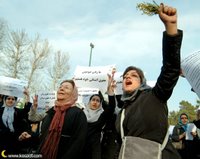 To see a video of the demonstration and its being attacked by security forces, click here.

Moreover, at the end of several March 8 ceremonies in Sanandaj, the following communique was passed:

March 8 is the day to fight for equality and freedom.

It is the day in which equality of all in all aspects of social life is affirmed.

We, the participants in March 8 ceremonies in Sanandaj, reject any kind of sexual, class, or religious discrimination among people. We believe that all discrimination and oppression is rooted in economic inequality. We hereby declare our demands as follows:

1-Human rights in all social, political, and economic realms should be equal.

2-All sexual apartheid laws should be abolished immediately.

3-Healthcare, education, accommodation, and occupation are rights of all and not the advantages of a minority.

4-All death penalties and stoning laws should be abolished.

5-We demand full social care for single mothers and homemakers. Housework should be considered among hard labours.

6-Homeless people (women, men, and children) should receive full protection and welfare of law and the state.

Here is a picture of one of the ceremonies: 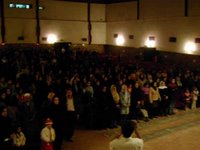 On International Women's Day: For Hatun