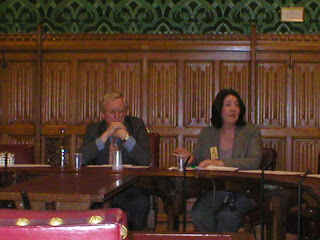 Maryam Namazie was a guest speaker at a meeting on October 29 with Humanist MPs held at parliament. The meeting was organised by the British Humanist Association.

Maryam spoke about the importance of the Council of Ex-Muslims and the need for a concerted effort against political Islam through the defence of citizenship rights, secularism and humanity without labels.
She noted that the Councils across Europe are representative of a movement in Iran for similar demands, which is bringing political Islam there to its knees. She stressed that a US attack will only further strengthen the Islamic regime of Iran and push back the progressive social movement in that country.

On Trade Unions and Islamic organisations