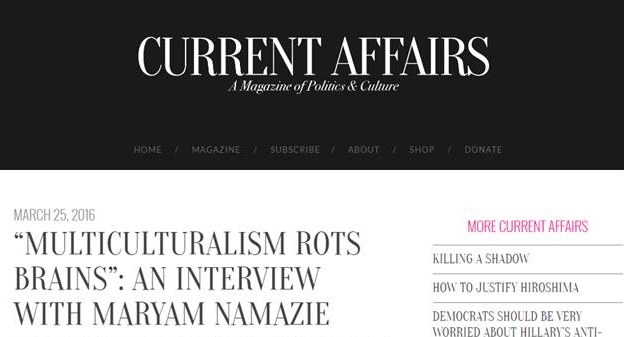 Here’s an interview I did with Current Affairs entitled “MULTICULTURALISM ROTS BRAINS”:

Current Affairs: Most of those who are vocally critical of Islam and Islamism today seem to come from the far right. You come from the left. What is the substance of your criticism, and how does it differ from that which we hear from the ​nationalist, anti-immigration camp?

Maryam Namazie: Well, I don’t agree that most of the criticism comes from the far right. I think that’s a narrative we’re often fed, whereas if you look at a large amount of the resistance that takes place against Islamism, whether it’s from the Middle East, North Africa, South Asia, or the diaspora of immigrants and refugees who have fled those regions, you do find that a lot of those people are on the left. So, I work with lots of women’s rights’ campaigners, for example, secularists who are very much on the left… I think it’s not the far right that’s the only vocal opposition. It’s been portrayed as such, in the same way as it’s been portrayed that Islamists represent Muslims.

There’s a big difference between a left or human perspective in this fight against Islamism and a far right perspective. Fundamentally, I think the difference is that the far-right politics is also a politics of hate very similar to Islamist politics. Islamism is also a far right movement. If you look at the far right, they are primarily defending what they consider a “Christian” West, vis-a-vis a “foreign” religion: Islam, and what they consider foreigners. And it’s very much based on placing collective blame on Muslims and migrants, seeing them as one and the same with Islamists. My perspective, and the perspective of many of the people who fight with me, is human-centered. Islamism is a fascist movement, we have to be able to oppose it. Islam is a religion, we have to be able to criticize it, whilst defending universal values, secularism, and equality between men and women. Not placing collective blame, and seeing dissent amongst those deemed ‘other’ as well. So I think there’s a huge difference between the positions.