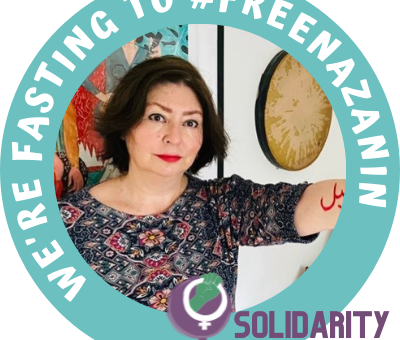 With the news that Nazanin is home, we at FiLiA wish to start by offering our love and solidarity to Nazanin, Richard, Gabriella and their family. We also welcome Anoosheh Ashoori and send love to his daughter Elika Ashoori and family. Since reports first started circling that Nazanin and Annosheh were at the airport in Tehran we were on tenterhooks waiting for the news that they had arrived safely home. To know that they are back – it’s hard to find the words to describe.

Last year when Richard’s hunger strike began – another attempt to do something, anything, to make this government take notice – we thought ‘what can we do to help?’. It was Margaret Owen OBE who planted the seed of an idea during our podcast episode with her. Here was a formidable Human Rights lawyer, an 89-year-old woman who has dedicated her life to helping others, continuing Richard’s hunger strike with one of her own. If she could do it, maybe we could?

We launched the FiLiA #Women4Nazanin solidarity action: a chain of women fasting, with one aim in mind – to show Nazanin that women everywhere stood with her, and that we would not forget her; we would be beside her until she was free.

On the 20th December 2021, Maryam Namazie (an Iranian-born writer and campaigner) along with FiLiA CEO Lisa-Marie were the first to pick up the baton. We put the call out to our sisters around the world and they answered. That evening, as we spoke outside Downing Street at the Christmas carol concert arranged by supporters of Nazanin, we were able to share the astonishing news that in less than 24 hours, over 500 women had signed up to fast. By the time we went to bed that evening, it was over 700. Today 1,173 women have signed up in total, taking us to 24th March 2025. We had hoped we would be able to tell some of those women that they didn’t have to fast; that Nazanin was home. To be able to tell over a thousand of them is wonderful!

Southall Black Sisters CEO Pragna Patel said beautifully outside Downing Street: ‘To fight for one woman’s freedom is to fight for our own’. Pragna went on to state that we can no longer afford to remain bystanders to political injustice in the face of authoritarian and compassionless forces of fear division and hatred.

Another of the #Women4Nazanin fasters, the Women’s Rights Activist Sophie Walker wrote that Nazanin was caught between men playing politics; a tool in their war games and as leverage for a debt. To tear a mother from her child is one of the cruellest tortures that one can inflict, and the callous indifference shown by this government has been shocking.

One by one, woman by woman, the seeds of solidarity were spread through fasting until Nazanin arrived home. Our fast may now be over, but the Sisterhood that has grown will continue in our work to put an end to using families as pawns in war games.

“I can’t tell you how happy I am to hear that Nazanin is home where she belongs after six long years. This is truly a day of celebration. As we said all along, Nazanin was a hostage. The trumped-up charges quickly disappeared once the UK government paid off its debts to Iran. The question now is who will pay the debt of justice owed to the many other dual nationals and political prisoners still held by Iran? Women political prisoners like labour activist Sepideh Gholiyan who is gravely ill and being denied medical care, civil rights lawyer Soheila Hejab, Kurdish activist Zeynab Jalalian, sentenced to life in prison for enmity against God, Golrokh Iraee Ebrahimi who has been in prison since 2014 for an unpublished manuscript condemning stoning, Yasaman Aryani, initially sentenced to 16 years in prison for being unveiled and distributing flowers for International Women’s Day” – Maryam Namazie, British-Iranian Human Rights Activist.

As always, women will roll up their sleeves and get to work, picking up the pieces of male violence.

In Sisterhood and Solidarity.

“After nearly 6 years of unjust imprisonment, Nazanin will finally be able to join her husband and daughter. This is really a day of celebration for all those who campaigned on her behalf. At the same time, we mustn’t forget the many other dual nationals and political prisoners unjustly held by the Iranian regime. The fight for their release must continue unabated.”

“Historically, women have always been used as a pawn during conflicts that have nothing to do with them. It doesn’t surprise me that Nazanin was caught in the middle of this quagmire. But I’m beyond pleased that she’s home and hope her story will stand the test of time so such a terrible thing doesn’t happen to any woman, or anyone at all.”

Fasting in solidarity with Nazanin enabled me to feel very connected to her and all the other women who have fasted, sharing in something bigger and bringing our energies and efforts together to keep the pressure on her release. I’m ecstatic and emotional that she’s finally home and can now be safe with her family. As proud as I am of all the women who signed up to fast in solidarity (and I think it shows the immense power of women coming together), I’m delighted we don’t have to carry this on for the next 3 years.

“Nazanin Zaghari Ratcliffe is on her way home! In these dark times, we badly needed this  good news! This could not have happened without Richard’s courageous and dignified struggle for her freedom. He has shown us that even in the face of immense obstacles, we must never give up hope. Nor should we forget the other political prisoners in Iran and around the world. “ 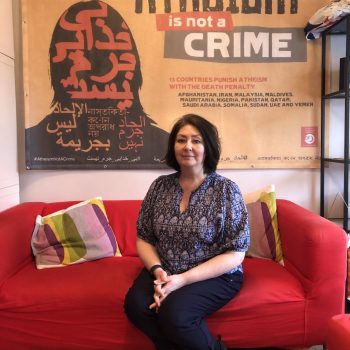