I have begun my weekly TV programmes again broadcast via New Channel TV to the Middle East and other countries via satellite after a long hiatus. For my first programme back, I speak with the brilliant Hamid Taqvaee on the 99% movement. Here it is:

A TV International interview with Hamid Taqvaee on the 99% movement broadcast on 20 October 2011.

Maryam Namazie: The world-wide 99% protests have been amazing to see. We keep hearing, though, that it has to do with greed. Will things improve if there is less greed?

Hamid Taqvaee: Greed is what people refer to because that is what they are told. When the financial crisis began, mainstream media and politicians spoke of greed as if there were a bunch of greedy executives, bankers and major stockholders on Wall Street who had created the entire problem. That was the image people were given – that there may be something wrong with the system that needed modification but the real problem was greed and greedy people. Obviously, greed is not the reason behind the situation we find ourselves. I mean, even if you say it is greed, the system needs greed. In reality, the problem we faced has been created not by greedy people but by a greedy system. And if you want the system to work you need greed and that greed is personified in bankers and other capitalists. The problem is the system, however, not some greedy people.

Maryam Namazie: Moreover, we often hear that the population at large is greedy, that they are responsible for over borrowing and living a life on credit. So, it gives the impression that it is a behavioural problem rather than a problem with the system.

Hamid Taqvaee: The question of credit and the fact that people have to borrow in order to live means there is no other way. People cannot be blamed because they want to live! One cannot say that because people have had to borrow in order to live, that they then created the problem. Again here we have a system that works based on credit, credit to the banks, to the big companies, to the capitalists and to people. Capitalists borrow to invest and people borrow to spend. People are consumers; they have to borrow from the banks in order to pay for rents or mortgages, for bills and for basically everything.

Maryam Namazie: You are saying that it is not about greed per se but about the system itself.

Hamid Taqvaee: Yes, it is the whole system, and every part of the system is needed by other parts. Everything matches and corresponds. The system is based on credit cards, on mortgages, on the stock market, financial capital and so on; it is also based on greed if you like. The whole thing works and works this way. One cannot say some parts are good and others bad. It doesn’t work that way.

Maryam Namazie: Some people will say that even 99% protesters are using the products of capitalism from the social networks and tents they use to the clothes they are wearing.

Hamid Taqvaee: Are you sure these are the products of capitalism and not the products of workers and people, many of whom are not out of work? Everything the Wall Street occupiers use was created by them in the first place. The society’s wealth is created by the 99%. I don’t think any capitalist, banker, or major stockholder has ever seen a production line, or been on a factory or in a shop floor, ever.

In fact the real problem is that the people who created all the products are the same people who cannot afford them. They cannot even survive without borrowing from those who possess everything without working for them – the 1%. Well, look! When you say 99% against 1%, it is a question of wealth and the way it is shared by the population. According to the statistics 1% of the US population owns more than 40% of the entire wealth. Now we ask who created the wealth of this 1%? Of course the answer is working people and not those who own the capital or the banks. It is obvious.

Maryam Namazie: The protesters are not only against an economic system, but inequalities that people are facing and the fact that they cannot afford health care and many basic things any more. But it is also grievances against the political system, which is more interesting because often parliamentary democracy is shown to be the hope of people everywhere. What is your take on this?

Hamid Taqvaee: There is a slogan in the movement that says both parties, Democrat and Republican, are Wall Street parties. People know that. It is not just a matter of how the wealth of society is distributed. The problem is that a tiny minority, who possess the lion’s share of the wealth, are in power as well. They run the army. They decide on all major issues, foreign policies, national policies; they own Wall Street, and they own Congress. They own Washington and all the lobbies. Everything! Every aspect for political power, social power, and economic power is in the hands of 1%. It is not just a question of wealth. It is a question of rights, of controlling the whole society which effects everyday life, politics, media, army, social matters, cultural matters, everything. They control everything. This protest is against the very top of
the society, which controls and runs everything.

Maryam Namazie: Can you just switch financial markets off and what would be solution?

Maryam Namazie: So, everything is part of it – the inequality, unemployment and social injustice?

Hamid Taqvaee: Everything is part of it.

Maryam Namazie: So, what is the solution? Socialism, it is said, is passé and old fashioned.

Hamid Taqvaee: The problem is not old-fashioned. I do not know why the solution, i.e. Socialism, is old fashioned! If you are jobless and you have no rights and no voice, and if the society is still controlled by 1%,, then socialism is alive and relevant! Socialism is about those issues. I know that the Soviet Union’s brand of ‘socialism’ is old fashioned; it is gone. But the Soviet Union had nothing to do with Socialism in the first place. Socialism is the movement that answers all the basic issues of our time, including the economic crisis and its political and social consequences, and as such is relevant to the everyday life of a majority of the people more than ever.  The socialist movement shows you how to get rid of the present system. And that is an urgent question for everybody. This is on everyone’s minds. People have a parliament, political parties, and ‘democracy’ but these have nothing to do with what is going on. Our views don’t matter. Nobody is counted. Nobody asks us what to do. The 1% make peace, they make wars, they bailout, they impose austerity measures, and they do whatever they want whenever they want. And the whole system has nothing to do with us until we are asked to vote again every four years and elect somebody where all of this is going to happen again because it is the
same system. Socialism is the real solution to the situation we face and it is not old fashioned until of course poverty and inequality themselves become old fashioned. 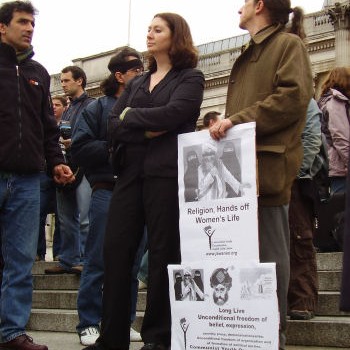