Here’s the edited transcript of a TV International interview I did with Hamid Taqvaee on the Arab Spring, broadcast during October 2011. He’s leader of the Worker-communist Party of Iran.

Maryam Namazie: Is the Arab Spring linked to the global 99% movement?

Hamid Taqvaee: Of course it is linked! First of all, they are linked because the roots of both movements are the same and that’s the economic situation or crisis worldwide. Some of the main slogans of the revolution in Egypt were about bread, unemployment, and poverty and you see the same thing happening in the West. That’s one thing that connects the two. The other is that the form and method of protest is similar. The whole idea of occupying Wall Street comes from Al-Tahrir Square in Egypt. And it’s not only Egypt and New York of course.  In every other place in the world we had seen the idea of occupying the streets and reclaiming the streets for ourselves. With the idea of occupation, comes the idea of control. We have to take control, we the people, the 99%, have to take everything into our own hands. You can say that the idea is a new one, and it is the basic idea of the Arab Spring, the Middle East revolutions and the protests in the West. It’s not only demonstrations; it’s not about a one day protest and then going home. It’s about taking to the streets, remaining there, and taking control.

Maryam Namazie: There’s been opposition to parliamentary democracy in protests in the West and worldwide, though the Arab Spring is often portrayed in the media as pro-democracy movements. Would you agree?

Hamid Taqvaee: No, I wouldn’t. I don’t think that you can call them pro-democracy as such. They are certainly against dictatorship but that doesn’t necessarily mean that they are pro-democracy. They are pro-freedom. People want to be free but these days democracy identifies itself with parliament and elections. Overall, that’s not a very attractive idea because people in the Middle East see its consequences for people in the West. Like in Greece. They have a parliament and elections but one can see the abysmal situation the people are in. Even in the West such as in the US or Western Europe, parliaments are very busy implementing laws against people, cutting social and health services and so on and so forth. So it’s not very attractive… Every Egyptian must think: a parliament to do what? The same as in Greece?

Fifty, even thirty years ago, it was different. People wanted democracy. It made sense somehow. But these days nobody is really for democracy.

Maryam Namazie: It seems though that if you are not for parliamentary democracy then you’re not for people’s participation in society. What would be an alternative then?

Hamid Taqvaee: The alternative is taking shape already. The alternative is people with their committees and councils. They’re organising people’s assemblies. As I have said before, with the idea of occupying the streets comes the idea of controlling society. People are now saying ‘we can do this’. ‘It’s possible’. Especially with the new technology, Internet, social media, and so on people think that it’s doable. We can do it. We can take the control of our lives. As one of the activists in Puerta del Sol Square in Madrid said ‘Our dreams don’t come out from the ballot box’. It basically means that people know that it is not just a question of free elections. It’s a question of being free in everyday life, making one’s own decisions, and taking control. And parliament is not going to do that for them. Parliament is too busy with saving bankers and capitalism. So this situation brings with itself the idea of taking control, taking everything into our own hands.

Maryam Namazie: They do exactly what they promised not to do!

Hamid Taqvaee: Their election promises are lies. They will say anything to get your vote and then they go and carry out their own policies, the policies of the 1%. People elect the parties or members of parliament of the 1%, and then they do what they like for four years. People who are dissatisfied then vote for another party of the 1% and they practically do the same but with new characters.

Maryam Namazie: Going back to the issue of people’s participation, revolution is one way in which people participate. Some people though believe that the revolutions have been a failure and they’re helping to bring Islamism to power, even in places where they didn’t have power in the Middle East and the North Africa.

Hamid Taqvaee: I think the revolutions were against Islamism as well because Islamism had no role in them. Islamism is a very familiar movement to people in the region. For ten years after September 11, we have Islamism in one camp, and Neo-Conservatism and US-led militarism in the other; and everybody knows what they represent. Islamism means going back to Sharia laws, anti-Western and in a way anti-civilization values, and returning to Islamic culture, where women are veiled and have no rights at all. That’s Islamism. Political Islam is based on these values. But the revolutions in Egypt, in Tunisia, in Syria were not about these. Syria’s movement is totally against Islamism because Bashar al-Asad is asymbol and pillar of Islamism. In Egypt, in Tunisia, in Lybia even, we have had revolutions that are not about those medieval values. Those revolutions have already declared that they are for freedom, bread, and for human dignity. So they have nothing to do with Islamism. I know that some Islamic groups and states, like the Islamic Republic of Iran, will say that the revolutions are Islamist but people on the street don’t say that.

Maryam Namazie: But there’s a danger of Islamism taking power.

Hamid Taqvaee: There is always such a danger because as long as Islamism is a political power in the region, they will do whatever they can to take power in the situations created by revolutions. But they had nothing to do with the revolutions to begin with. The Muslim Brotherhood which is a very strong party in Egypt, with even members of parliament during Mubarak’s time, were nowhere in that revolution. You didn’t see them at all. People are not for, say, Sharia law in Egypt. You don’t see that trend; you don’t see that movement. 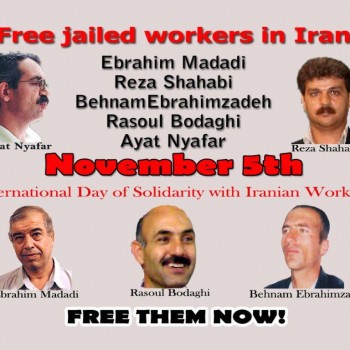