One Law for All’s 4th Passion for Freedom Art Festival opened on 3 November with a private viewing at Unit24 Gallery. Hundreds attended the viewing.

The festival, which is addressing the issue of freedom, is showcasing the work of over 40 artists from 20 countries worldwide (including censored works shown in London for the very first time) under the direction of Agnieszka Kolek, KM Curator and Marianna Fox, Assistant Curator.

Winners of the 2012 Freedom Awards are as follows:

The winning pieces were selected by judges Francisco Laranjo (Artist and Head of School of Arts at Porto University) and Nick Cohen (Writer and Columnist).

The Public Award went to Maria Strzelecka for “Mother Anarchy”:

A Special Freedom Award was given to Robb Leech for “My Brother the Islamist”:

One Law for All Spokesperson, Maryam Namazie, made the following speech at the private viewing:

One of the artists celebrated at the festival, Ai WeiWei says: “If we don’t push”, nothing changes. Clearly, change it must.

You can get more information on the 2012 festival here and here.

Information on previous festivals can be found below: 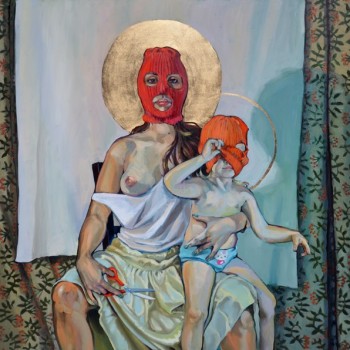 Panahi's This is Not a Film