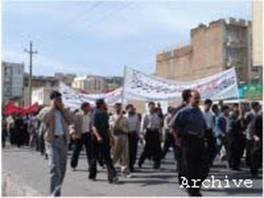 Thousands of Haft Tapeh sugar cane workers marched again on Sunday and Monday through the town of Shush ahead of the sham trial of five of their colleagues tomorrow, which the workers are fighting to revoke. As in the last few days, the people of the town also joined the march today. At one point the workers blocked the main highway in the area.

In today’s march, the workers shouted slogans for the payment of unpaid wages and the scrapping of the legal actions against their colleagues. Another slogan reverberating through the streets today was for the release of jailed workers: “Jailed workers must be freed!”

The sugar cane workers are demanding the payment of overdue wages and the dropping of the cases against five of their colleagues, who are being witch-hunted for their leading part in the strike. Jalil Ahmadi, Fereydoon Nikofard, Ahmad Nejati, Ghorban Alipoor and Mohammad Heydari Mehr have been summoned to appear before court tomorrow, Tuesday. However, a large mobilisation is also expected tomorrow on this crucial day of the fight.

Meanwhile workers from around the country have expressed their support for the strike. The Free Union of Iranian Workers, workers of Ahvaz Pipe Manufacturing Company and a group of workers from Iran Khodro Car Manufacturing Company issued statements today to express their solidarity with the workers and to condemn the impending action against the five activists. Last week several workers’ organisations issued a Joint Statement to condemn the persecution of the sugar cane workers, as well as calling for the immediate and unconditional release of currently jailed workers Javanmir Moradi, Taha Azadi, Sheis Amani and Mansoor Ossanlou (More info on site of International Labour Solidarity Committee of the Worker-communist Party of Iran).

A video clip of the march today is available on YouTube.