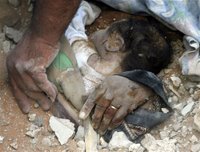 All we keep hearing after today’s (albeit temporary) truce went into effect is who managed to win in the Israeli war on Lebanon.

Was it Israeli state or Hezbollahi terrorism they ask and ask and comment on.

One look at 13 day old baby Waad lying dead in her mother’s clutches, though, is enough to tell them and anyone who cares to listen that no one can win in the war of terrorists but the terrorists themselves.

The execution of sweet 16 Atefeh

Islamic family law in Britian would be disastrous