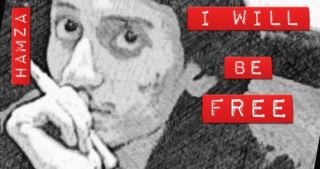 We demand immediate freedom for Hamza Kashgari!
Open letter to the Saudi Embassy in London-UK

To Whom It May Concern:

We are outraged to learn that 23 year old writer Hamza Kashgari is in prison after being deported to Saudi Arabia from Malaysia where he had fled in fear of his life. The deportation of a person with a well-founded fear of persecution is a violation of human and refugee rights. We demand that he be immediately released and his life safeguarded.

Kashgari is not a criminal; as a poet and writer, he was merely Tweeting an imagined conversation with Mohammad, Islam’s prophet. This is his basic human right to free expression and would not be deemed a crime in many countries world-wide. It is because he is a Saudi national and due to Sharia law that the expressions of Kashgari and others, including many Muslims who question, criticise and challenge Islam, become matters of life and death. His persecution is within a context of on-going state repression, lack of social justice, and restrictions on rights and freedoms for all citizens via Sharia law and repression.

We call on the Saudi government to immediately and unconditionally release Hamza Kashgari. It is not Hamza who must in condemned but the officials and clergymen calling for his death. His persecution is not justice but barbarity.

Any harm or punishment meted out against Hamza will be met with world-wide public outrage. Countless groups and individuals have already come to the fore demanding his release. Here is one such petition in his defence supported by well known writers, campaigners and defenders of free expression.

Needless to say, the Saudi government will be held accountable for Hamza Kashgari’s safety and life.

We look forward to your earliest response on this urgent matter.

Please sign the petition in support of Hamza Kashgari. Tell your friends, family and colleagues to sign it. The more we keep the spotlight on his case, the more difficult it will be for the Saudi government to harm him. Sign it nowwww! Please!

(Photo via Free Hamza Kashgari Facebook Page, which you should join too.)

Books on atheism and Islam