In 2006, Ayatollah Lankarani issued a death fatwa against Azerbaijani writer Rafiq Tagi for his writings. In 2007, a Baku court sentenced him to three years in jail for criticising Islam and Islam’s prophet Muhammad. He was pardoned and released later that year.

But now they have finally killed him.

The prominent writer and critic of Islamism, Islam, the Islamic regime of Iran as well as the Azerbaijani government received multiple stab wounds on his way home on 19 November. He seemed to be recuperating, even doing an interview where he said the attack may have been organised by the regime in Iran.  However, he took a turn for the worse and died. Some are complaining that security at the hospital was lax and that he could have been poisoned.

The Islamic Republic of Iran has denied any role in his murder.

Yes and according to vile Ahmadinejad via the vile Press TV, the Islamic Republic of Iran is ‘exemplar of human rights’.

Via Mina Ahadi on Rowzane.com

I would rather be naked than silent... 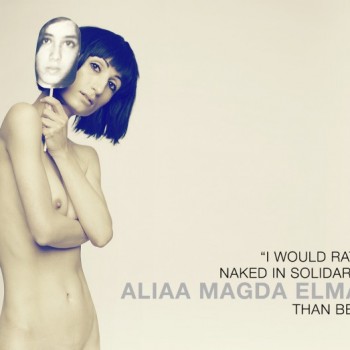 New 5 by 5 anti-veil movement in Iran