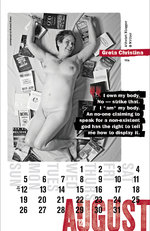 Greta Christina has responded to Azar Majedi’s absurd attack on the Nude Photo Revolutionary Calendar. If you recall, I responded to her recently as well. She says:

Now. It is certainly the case that my choice to participate in this calendar was made in the context of a sexist culture: a culture that treats women as sexual objects rather than subjects, a culture that treats women’s bodies as commodities, a culture with a strong tendency to value women primarily as ornaments, sexual playthings, and babymakers. My choice to pose naked for this calendar and let the photo of my naked body be (a) disseminated for free on the internet and (b) sold to raise money for feminist causes… yes, that choice was made in the context of this sexist culture. It was in some ways influenced by that culture, and in some ways it contributes to it.

And your choice wasn’t?

Your choice to scold me, and the other women who posed in this calendar, is somehow magically free of this sexist culture? It somehow has not been tainted by the sexist culture that treats women’s bodies as shameful, the culture that reflexively abjures women to cover our nakedness, the culture that demands that women share our bodies only with the men who rightfully own them, the culture that reflexively slut-shames women for enjoying our bodies and our sexualities and making our own decisions about it? My selling photos of my naked body to raise money for a cause I believe in is automatically part of the commodification of women… but your attempt to enforce the standards of modesty has nothing to do with women’s physical and sexual suppression? I am a cog in the machinery of this culture… but you, magically, have freed yourself from it?

And as a result, you have earned the authority to tell me what I should and should not do with my own naked body?