WPI protests attendance of the Iranian regime at ILO conference

WPI protests attendance of the Iranian regime at ILO conference

On Wednesday June 3rd, WPI activists carried out a protest action at the opening session of the 98th International Labour Conf 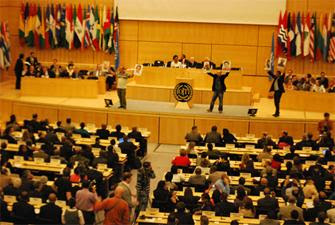 erence in Geneva to urge for the expulsion of the Islamic regime of Iran from the ILO, while highlighting the situation of jailed workers in Iran. The conference venue was the UN’s Palais des Nations, where around 4,000 delegates had gathered in plenum at a packed Conference Hall.

Seconds after the sounding of the opening bell, at around 10.20am, three WPI members took to the stage while holding pictures of a number of jailed workers in Iran. Pointing in the direction of the Iranian delegation, they called for the boycott of the Islamic regime at the conference and for its expulsion from the ILO. They said a regime which arrests, jails and flogs workers should not be in the ILO; a regime which executes children and stones women to death belongs not in an organisation bearing the name of ‘labour’ but in international courts to answer for its crimes against humanity.

The action, which lasted for around three to four minutes, was intercepted with the audience’s repeated applauds. The warm reception it received is an indication of the increasing international isolation of the Iranian regime, in particular among the world’s trade unions. A WPI statement, calling for the boycott of the Islamic Republic, was widely distributed to the delegates after the morning session inside the UN compound (see below).

Concurrently with the action inside the hall, a rally was held at the Place des Nations nearby, in front of the Nations Gate, which lasted till around 3pm.

A regime which arrests, jails and flogs workers should not be in the ILO!

Boycott the Islamic Republic of Iran at the ILO conference!

A delegation from the Islamic regime of Iran is attending the ILO’s annual conference. These people are not representatives of Iranian workers. They only represent the Islamic regime of Iran, which is a persistent and systematic abuser of workers’ rights. This regime jails and flogs workers for organising in a union, for attending May Day rallies and for protesting over pay and working conditions. This regime is a horrific abuser of human rights. It executes children and stones women to death, and has the highest per capita record of executions in the world. Such a regime does not belong in the ILO, but in international courts to face charges for its crimes against humanity. Such a regime should be expelled from the ILO and from all international bodies.

We request all the workers’ groups and all delegates appalled at the abuse of labour and human rights in Iran to walk out of any sessions at which the representatives of this regime may want to take the podium and speak. Their mere presence should prompt your immediate walkout.

Just like the South African regime during the years of racial Apartheid, so the Islamic regime of gender Apartheid and gross labour and human rights abuse should be boycotted at all international bodies, and first and foremost at an organisation which bears the name of labour.

§ Protest against the attendance of the Islamic regime of Iran at the ILO conference!

§ Call for the release of all jailed workers in Iran!

A regime which arrests, jails and flogs workers should not be in the ILO!