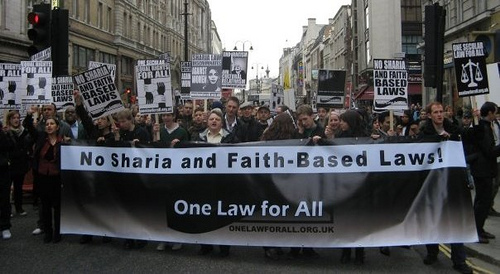 Here’s a letter being sent to supporters today from One Law for All:

It has been another busy year for One Law for All and we thank you as always for your support – without which, our vital work would not be possible. We are particularly grateful to our 100 Club regular donors.

Sudanese ex-Muslim and One Law for All activist Nahla Mahmoud has spoken eloquently on Channel 4 about the discriminatory nature of Sharia and the urgent need for our campaign.

Whilst 2012 has been a year of ups and downs in the fight against sharia and Islamism and in defence of secularism, equality and rights, there is every reason to be optimistic as we enter 2013.

The public debate on sharia is changing and this is no more evident than at our speeches and speaking engagements. University societies the length and breadth of Britain are increasingly speaking out for secularism and human rights. Moreover, a Bill to reign in the power of sharia in Britain has passed two readings in the House of Lords, sharia bodies have been exposed as being abusive to children in ‘marrying’ young girls to old men, forced marriage has been discussed in Parliament with a Government commitment to criminalise the practice, and One Law for All continues to grow and to influence this debate – including in our vital opposition to the far-Right and its attempts to hijack the issue of sharia law to further its own racist agenda. A summary of our 2012 activities can be seen here.

With your help, One Law for All will continue to lead the fight against sharia in Britain and elsewhere, and for equal rights for all, including by supporting the Equality Bill and speaking across the country and internationally to raise awareness and mobilise support.

Moreover, we plan to release a report entitled: “Siding with the Oppressor: The Pro-Islamist Left”, which accompanies our previous report “Enemies Not Allies – The Far Right” and highlights those who support and provide cover for Islamists and pro-sharia advocates. We also plan to issue a report and hold a seminar on the failures of multiculturalism in the area of child protection. We will be organising debates with Islamists and the Far-Right and issuing a call for papers on Sharia law across Europe too.

December 2013 will mark our fifth anniversary; we plan to celebrate with a huge concert, including with finalists of our “Songs for Freedom” music competition organised by Shelley Segal. We are inviting musicians and songwriters to create and submit their original material for the competition.

Clearly, much has changed in the public debate on Sharia law and equality as a result of our campaign. If you can, please continue to support us in our essential work. To donate to One Law for All, send a cheque made payable to One Law for All to BM Box 2387, London WC1N 3XX, UK or pay via Paypal. You can also commit to giving at least £5-10 a month via direct debit. You can find out more about how to donate or join the 100 Club here.

Also, if you shop online, please do so via the Easy Fundraising’s website. It won’t cost you anything extra but can help raise much needed funds for One Law for All.

Thanks again for your invaluable support. We look forward to continuing to fight for human rights for all in 2013.

Maryam Namazie
Anne Marie Waters
One Law for All