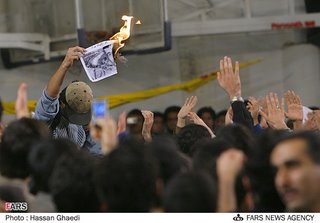 Following a day of protest on December 6, which was led by the left wing socialist students in many universities in Iran, Ahmadinejad, the president of the Islamic regime attempted to speak at the Tehran Amir Kabir Technical College of Tehran University. The audience had been selected from the security forces, however the students of the university gate crashed the meeting and disrupted his meeting by shouting ‘Down with the Dictator’ and ‘Liar get lost!’ A picture of Ahmadinejad was set alight.

This is not the first protest against him as the media deceptively claims; there have been many such protests against him, Khatami, other heads of the regime and the Islamic Republic of Iran.