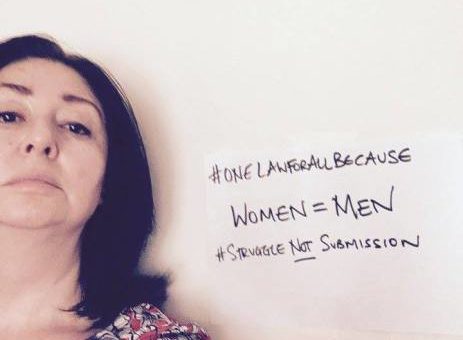 One of the things that is most troubling about identity politics and multiculturalism as a social policy is how deception becomes a necessity in defending the “tribe” or “community”, irrespective of the truth.

Of course you don’t need to be an Islamist or on the far-Right to do this – something Sam Harris fans fail to understand. As long as one buys into the idea of essentially different communities and groups, promoting the Islamist narrative (under the guise of defending the Muslim “community”) or the far-Right one (under the guise of defending the Christian and Western “community”) is very easy to do.

This translates into policies such as Muslim profiling or the barring of certain nationalities because individuals are seen to be extensions of or defined by the group or tribe they apparently belong to.

It’s something “progressives” do all the time too when they come across any criticism of Islam or Sharia law. They hunker down behind what is fundamentally an Islamist project in order to defend “Muslims”, despite the human costs, including for many Muslims. Let me give you a few recent examples from British universities.

At my talk in January at LSE on Sharia law’s incompatibility with human rights, a Mauritanian woman said that the inequities of Sharia law I was describing were not true with regards Mauritania. This is despite the fact that Mohamed Ould Cheikh Ould Mkhaitir is on death row for apostasy. Afterwards, whilst speaking to a colleague, she said she knew about the apostasy case but thought no one else would. In fact, she had come to Britain in order to “get away” from “the community”.

This happened again at Westminster last week where I spoke on “Secularism and Diversity” with Tariq Modood. A woman strongly defended Sharia courts during the Q&A. After the event, she came up to me and privately said that she agreed with much of what I had said about the courts and that she herself had refused to go to one for her divorce.

Of course, the truth is irrelevant when defending identity politics. Even if means legitimising or trivialising violence.

I have earlier explained details of restrictions I faced at LSE and Westminster, but two articles in student media outlets necessitate that I clarify some points of misinformation, even if only to reiterate the pervasiveness of the Islamist narrative.

One piece is entitled “‘Islamophobe’ to speak at Westminster” that was published before I spoke. The title says it all. The author didn’t bother to contact me, or the University’s Secular Adviser who had organised the event, for comment; nor was she interested in doing a follow up piece on the event (here are my opening remarks). Since apostates like myself are seen through Islamist eyes, what I actually have to say is irrelevant. That’s the crux of identity politics, though the “aspiring journalist” thought it was an: “Extremely neutral article to describe the situation in University“. Neutral indeed.

Similarly, the author of an article on my talk at the LSE didn’t bother to ask me for a comment. If he had, I could have cleared up a few inaccuracies in his piece:

* Firstly, I started my talk at LSE on the restrictions I faced not to “complain” but in the hopes of making some students think about how the Islamist narrative and identity politics prevent us from seeing the truth. The President of the Human Rights Society, Zohaib Ahmed, who had invited me there has generously said that I have: “the habit of playing the victim” but that is far from what I do. Those trying to restrict my talks are the ones playing victim. To them, the “other” (which is often a mirror image of themselves) is so fragile that they must be protected from an apostate’s point of view, whilst the welcome mat is dusted for Islamists like Hamdoon who promote death by stoning and the shunning of ex-Muslims.

More importantly, criticising inequality in treatment is not “complaining”; at the very least, a “Human Rights Society” should be able to grasp this.

* In the piece, Zohaib Ahmed further explains that “the chair was not imposed on Namazie’s talk because of the security classification – rather, there was a chair because the event was initially planned to be a debate with another speaker who subsequently pulled out. The chair was kept for logistical reasons…”

This is again simply not true. In an email sent on 26 January (see screenshot here), the very same Zohaib Ahmed explained: “As for Dr. Hamdoon’s talk, similar restrictions were not placed, though the room provided was of similar capacity. There were no security concerns besides the general risks associated with organising any event. The talk was not chaired; this is because we only request academics to chair talks if it is required by the LSE Room Bookings. In your case, for concerns about controversial content, the Room Bookings team requested us to have a chair”.

* The piece also asks: “And what about Namazie’s complaint of LSE security subjecting her to an unfair ordeal at the NAB entrance? That is not true either, he says. According to him, Namazie had come with five others who she claimed to be her security detail but whose presence was not made known to the event organisers beforehand, and therefore not registered by the LSE security staff.”

Again this is not what happened. I never said the five were my “security detail”; I don’t have a “security detail”. I merely said that I would not enter on my own. I don’t think this is unreasonable given the obvious inclination in favour of Hamdoon shown by both the LSE and the Human Rights Society.

* Finally on the issue of my being labelled “controversial” by the Human Rights Society though no such label was given for Hamdoon. In the piece it says:

“She even criticised the society for describing her as ‘controversial’ in the description on the Facebook event page, a label which doesn’t seem unreasonable considering how previous events involving her at other universities have panned out, including a talk at Goldsmiths which was constantly disrupted by several audience members”.

Of course the author, the Human Rights Society, LSE and anyone else can call me an “Islamophobe”, “controversial” or anything else for that matter – I have heard it all and worse. The point I am making though is that when I am labelled “controversial” and not Hamdoon, it’s because of the normalisation of an Islamist narrative which imposes de facto blasphemy and apostasy rules and sees apostates and blasphemers through the eyes of the Islamists.

Furthermore, the Human Rights Society doesn’t see the irony of my being penalised for the disruptions, threats and intimidations carried out by Islamic Societies. It’s victim blaming at its finest. As Algerian sociologist Marieme Helie Lucas says:

“I cannot even start telling you how one experiences a sense of madness when responsibilities are turned upside down in such a way; one feels like the raped girl, the battered woman, the child being caned who have been told by judges, police, families and media alike, over such a long period of time in history, that they were the ones truly responsible for sexual attacks, domestic violence and physical punishment in ‘education’; and that it was their own behaviour (how libertarian indeed! just being able to exist in the public space, to express an opinion, in short just enjoying one’s fundamental human rights!) which ‘induced’ these ‘responses’ – which were thus seen as legitimate.

“Yes, we do have an already quite long experience of perversity, which magically turns the victim into the abuser and blames her for the crimes that are committed against her”.

And so it continues.