This was published in The Freethinker today.

When I was 12 years old, soon after the Islamists took power in Iran, their thugs came to my school to keep boys and girls separate in the playground.

Even at 12, we girls were seen to be the source of chaos and fitnah in society.

This Islamist obsession with sexualising the girl child and controlling the female body seeps into and rots everything. In September 2013, for example, the Islamic assembly in Iran passed a law allowing for step-fathers to marry their adopted daughters arguing that since she is not a “real” child and will need to be veiled upon reaching puberty, the “marriage” will allow her to remain unveiled in the home.

The veil and gender segregation are regularly promoted as a deterrent – ie if women and men mix freely, women will lead men astray and will need to be stoned to death for adultery so better to prevent it from the get go.

Improper veiling is also blamed for rape: since men have not “granted” women permission to “show off their beauty”, men who become “aroused by women’s ‘nakedness’ need no permission to pursue their sexual urges”.

The veil is central to the Islamist project for the control and complete erasure of the female body from the public space.

Images of semi-naked women are not allowed in Iranian advertising. Photograph: Tehran Bureau

Artist Phillip Toledano has done a series on Iranian censorship of women calling it “Portraits of Absence“. It shows how black markers erase women’s bodies from packaging, magazines, adverts … When you think about it, the chador, abaya, burqa and niqab are merely fabric versions of this black marker upon the female body – erased and devoid of humanity: “The Disappeared”.

Despite the sinister and oppressive campaigns to put women in their “place”, here in the west, discussions around the hijab are sanitised, says Nushin Arbabzadah.

There is never a mention of how veiling has been imposed on the back of slogans like “death to the unveiled woman” and “either the veil or a beating”. Women have been intimidated, terrorised and shamed into wearing the veil, including via acid-attacks and assassinations. ISIS rips off the skin of womenwho violate veiling rules.

Even in places where it isn’t compulsory, there is immense pressure. InTurkey, a young nurse wearing shorts on a bus was recently attacked for her “immoral” dress. In Malaysia, salon owners are giving warnings against posters of unveiled women’s hairstyles. In Britain, “improperly” veiled girls are called hoejabis. And every day, the fatwa factories and propaganda machinery churn out further warnings to ensure that women toe the line.

But here in the West, the discussion is mainly around the “right” and “choice” to veil even though this right is mostly a formality given that there is no corresponding right or choice to remove one’s veil or be unveiled without real repercussions.

We’re told it’s a “right” and “choice” even when its imposed on children, a form of child abuse.

To speak of the choice of the Islamic veil by the child herself is a ridiculous joke. Anyone who presents the mechanism of the veiling of a kindergarten-age girl as her own ‘democratic choice’ either comes from outer space, or is a hypocrite who does not deserve to participate in the discussion about children’s rights and the fight against discrimination.

Ban the burkini, though, and everyone is outraged (even after the French courts have deemed the ban a violation of individual liberties).

I wish the magnitude of the vociferous defence of veiled women’s ‘choice’ and ‘right to veil’ by ‘progressive people’ would be matched with their defence of  women slaughtered for not veiling. But what we see, instead, hidden behind the left and human rights community’s unilateral defence of the human rights of veiled women, is in fact a clearly political position. ‘Progressives’ have chosen to defend fundamentalists who they depict exclusively as victims of US imperialism, rather than the victims of fundamentalists, ie, amongst others, the millions of unveiled women who have resisted their diktats as well as the millions of secularists, agnostics, atheists, and so on who have been abandoned as ‘westernised’ or even ‘allies of imperialism’!

History will judge this short-sighted political choice just as it did the cowardice of European countries at the onset of Nazism’s rise in Germany.

Last week, Fide’s Commission for Women’s Chess told women chess players to “respect ‘cultural differences’ and accept the regulations”  to veil after the governing body awarded next year’s world championship to Iran. These shameful apologists ignore the immense unveiling movement in Iran, despite continuous harassment by morality police, and punishments that include fines and up to two month in prison as well as the many men who are supporting them.

Calling for a “respect of cultural differences” is a call to respect the Islamist erasure of women’s bodies at the expense of dissenters.

When one is faced with a theocratic state and movement that aims to erase women from the public space, one’s refusal to “disappear” is an important form of resistance and dissent.

We’re told the veil is “our culture”; that we must “respect it”! I am sorry, but many of us will not respect the erasure of the female body no matter how it is packaged and dressed.

And anyway, culture isn’t homogenous – neither are communities or societies. Whose culture are we talking about? The woman and man resisting the veil or the theocrats imposing it? 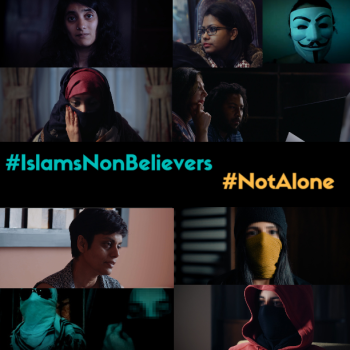