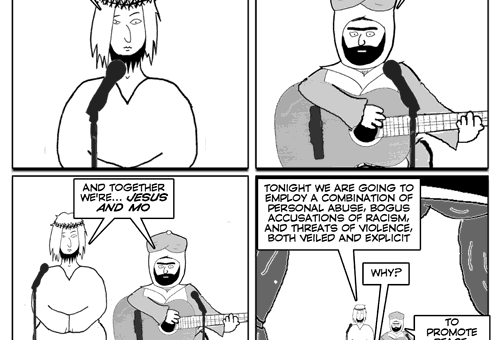 One Law for All is calling for a rally in defence of free expression and the right to criticise religion on 11 February 2012 in central London from 2-4pm.

We are also calling for simultaneous events and acts in defence of free expression on 11 February in countries world-wide.

The call follows an increased number of attacks on free expression in the UK, including a 17 year old being forced to remove a Jesus and Mo cartoon or face expulsion from his Sixth Form College and demands by the UCL Union that the Atheist society remove a Jesus and Mo cartoon from its Facebook page. It also follows threats of violence, police being called, and the cancellation of a meeting at Queen Mary College where One Law for All spokesperson Anne Marie Waters was to deliver a speech on Sharia. Saying ‘Who gave these kuffar the right to speak?’, an Islamist website called for the disruption of the meeting. Two days later at the same college, though, the Islamic Society held a meeting on traditional Islam with a speaker who has called for the death of apostates, those who mock Islam, and secularist Muslims.

Whilst none of this is new, recent events reveal an increased confidence of Islamists to censor free expression publicly, particularly given the support received from universities and other bodies in the name of false tolerance, cultural sensitivity and respect.

The right to criticise religion, however, is a fundamental right that is crucial to many, including Muslims.

Clearly, the time has come to take a firm and uncompromising stand for free expression and against all forms of threats and censorship.

11 February is our chance to take that stand.

You need to be there.

Contact us for more information or with details of actions or events being organised outside of London:
Maryam Namazie
Anne Marie Waters
Spokespersons
One Law for All
BM Box 2387
London WC1N 3XX, UK
Tel: +44 (0) 7719166731
onelawforall@gmail.com
www.onelawforall.org.uk

To help with the costs of the rally and donate to the crucial work of One Law for All, please either send a cheque made payable to One Law for All to BM Box 2387, London WC1N 3XX, UK or pay via Paypal.

The One Law for All Campaign was launched on 10 December 2008, International Human Rights Day, to call on the UK Government to recognise that Sharia and religious courts are arbitrary and discriminatory against women and children in particular and that citizenship and human rights are non-negotiable. To join the campaign, sign our petition here.

We are behind you