Queen Mary Islamic Society held a meeting today on ‘Traditional Islam’ with Abu Zabair as its speaker. It was advertised on ummahforum.com where the following call to disrupt [read threaten with violence] the 16 January meeting at which Anne Marie Waters was speaking on behalf of One Law for All on Sharia Law and Human Rights was also posted:

Brothers, the Queen Mary Athiest Society, sister of the shaytaani UCL Athiest Society (which published pictures of Rasoolullah(saw)) are holding an event today at Queen Mary University of London at 7:00 pm on ‘ Is Shariah in violation of human rights’.. We need your presence. Who gave these kuffar the right to speak? Let me ask you – if a bunch of kuffar got together and were given the right to touch your mother up and analyse her, then would you stand by and let it happen? Then what about your deen?!! Remember, these guys hate religion and are not looking to have an unbiased debate. Please be here by 7 pm. to let them know what we think. Back in my day no-one in UNi would dare even look the wrong way at a muslim, because we used to represent our deen and didnt take kindly to it being insulted. It is only when the pacifists ecame numerous that the kuffar dared to raise their heads. @ david sizer lecture theatre- francis bancroft building.

Abu Zubair has said the following as transcribed by Spittoon.org here:

Anybody who mocks Allah or his messenger or anyone or any aspect of religion which is known from the deen [religion], by necessity is a kaffir and a murtad [apostate] and is subject to execution because the prophet said “execute the one who changes his religion”.

The call to evolution is a call to kufr [disbelief] and apostasy from Islam.

If a person denies the obligation of wearing the hijab, which is to cover the head for women of course, then this person is an apostate.  He is no longer a Muslim.

And here’s a video of him saying all the above and more:

Now let’s see…  Jesus and Mo image or calls for execution. I wonder which is more offensive… I know, it’s really hard to choose.

Nonetheless guess whose meeting wasn’t cancelled? And there was no security guard saying: What do you expect…

We need nudity: In support of Golshifteh Farahani 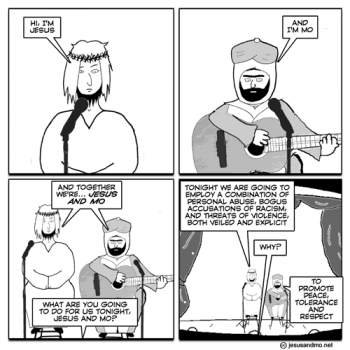