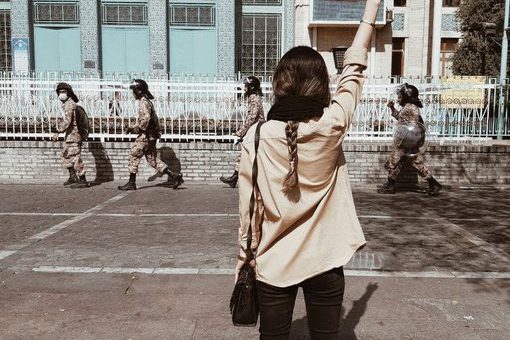 Protesters have gathered in central London to show solidarity with “the women’s revolution” in Iran sparked by Mahsa Amini’s death.

She said weekly protests have been staged in Trafalgar Square since Ms Amini’s death and similar events took place in cities around the world on Saturday after families of the flight PS752 victims, the Ukrainian plane shot down by Iranian forces in January 2020, killing all 176 on board, called for the protest.

The death of Ms Amini, 22, on September 16, after she was detained by police in the capital Tehran for allegedly not adhering to Iran’s strict Islamic dress code, has triggered mass protests in the country.

The demonstrations have involved more than 125 cities; at least 270 people have been killed and nearly 14,000 have been arrested, according to the group Human Rights Activists in Iran, Associated Press reports.

Ms Namazie said: “Today, as every Saturday, protesters came to Trafalgar Square to show their support for the women’s revolution on Iran.

“This is a revolution, with women at its forefront, with men by their side, that will bring the Islamic regime to an end.

“It will herald a new era in Iran, the Middle East and across the world.

“Its slogan is women, life, freedom. It’s a universal slogan that has captured the world’s imagination.

“From Trafalgar Square, protesters have created a human chain to the Houses of Parliament to call on the UK government to end relations with the Islamic regime, shut down its embassy and Islamic centres promoting the regime’s propaganda against protesters and exiles living in Britain.

“The British government has a moral duty to stop siding with the regime, stop recognising the regime and ending all diplomatic ties.

“People in Iran, our Generation Z, will bring this revolution to fruition, but we need public support in Britain and across the world to pressure their governments to stop relations.

“The Islamic regime is a regime of sex apartheid.

“It is unethical to keep working with this government as it murders our young people on the streets.

“We condemn the crackdown on protesters, journalists and internet freedom, and the use of violence in response to the expression of fundamental rights by women or any other members of Iranian society is wholly unjustifiable.

“We will continue to work, including with our international partners, to explore all options for addressing Iran’s human rights violations.”

She added: “We will never be able to comment on possible future actions or sanctions or designations.”

The Foreign, Commonwealth & Development Office has been approached for comment.

Threats I have received recently