Thank you for your letter dated 21 July addressed to CEMB (available below).

The crux of the issue, which you have failed to recognise, is this:

Pride in London has taken complaints against the Council of Ex-Muslims of Britain (CEMB) by the likes of the East London Mosque – a centre of homophobia – seriously because of a cultural relativism and tone policing that is only applicable to critics of Islam and never critics of Christianity.

Moreover, complaints have been given credence because of the erroneous conflation of criticism of religion and the religious-Right with bigotry against Muslims.

We remind Pride that “tolerance, acceptance and recognition” are for people (whether LGBT, Muslims or ex-Muslims), not beliefs or regressive political movements and States. Whilst we must hold all human beings – even those we disagree with – in high regard, this is not the same as accepting all beliefs without criticism. Clearly, Pride is able to make distinctions between criticism of beliefs and an attack on people when it comes to non-minority groups and religions other than Islam so it should not be too difficult for you to understand our position.

In your letter you say, protest “does not give people in our parade the freedom to ostracise, discriminate against or humiliate anyone else taking part.” But the question that remains is how has our presence and placards criticising Islamic homophobia, the East London mosque, States that murder LGBT and apostates ostracising, humiliating or discriminating against anyone? Are placards critical of Christianity, the Church, Jesus, the Pope… “ostracising, humiliating and discriminating against” Christians? It seems Pride has bought into the Islamist narrative that betrays the persecuted and defends the persecutors. This is a politics that rewards bullies and blames victims.

You add: “…Pride celebrates diversity and will not tolerate any individual making derogatory remarks about a person’s sexuality, gender, gender identity, race, age, nationality, disability, appearance, religion or any other factor.” Again, you confuse criticism of religion as being the same as attacking someone because they are Muslim or gay or a woman. You merely need to change any of our placards critical of Islam to ones critical of Christianity to see how absurd your position is.

You say: “there were some placards we feel may have the potential to breach our code of conduct. These placards may be seen to reject the existence of Islamophobia, to make defamatory statements about a specific group of people, and overall could have been seen to proactively question the ability to be LGBT+ and Muslim.”

This is more disingenuous nonsense and merely an attempt to justify your unjustifiable position. Islamophobia is a misnomer that conflates criticism of religion and belief with discrimination against Muslims; we can be critical of Islamophobia as a political term used to silence dissent whilst opposing racism. We certainly don’t need a lesson in racism from Pride; our members live it every day. Also we can be critical of Islam; this doesn’t mean one cannot be Muslim and LGBT. In fact, some Bangladeshi Muslims marched with us on the day. Unlike Pride, CEMB fights on several fronts, including against Islamism, the far-Right and racism. You say some of our placards were “defamatory”? Which ones? Presumably, the defamed can take us to court; we welcome it.

As for your determining whether CEMB has broken your code of conduct and will be able to march again in future parades, we must say this: your decision will be more important for you than for us. After all,  we don’t need your permission to march for LGBT rights or the rights of apostates. But your decision will determine whether Pride, which has been a source of inspiration for LGBT globally, will continue to be a beacon by showing the courage to give LGBT ex-Muslims the right to self-expression alongside our Muslim friends and family and as a respite from our daily experience which are intrinsically linked with fear, violence and intimidation, or whether it will remain firmly corporate Pride more concerned with causing “offence” that the rights and lives of ex-Muslim and Muslim apostates and LGBT.

As a follow up to a resolution on Pride adopted at the 22-24 July International Conference on Freedom of Expression and Conscience, we ask Pride to do the following:

1) Provide evidence for the serious allegations made against CEMB

2) Make a statement against all laws criminalising homosexuality, apostasy and blasphemy and against incitement to hate and murder by preachers at mosques like the East London mosque

3) Clarify whether by condemning ‘Islamophobia’, Pride meant to side with Islamists supporting the judicial murder of ex-Muslims and gay men

4)  Affirm CEMB’s continued presence at Pride in London to show that they side with dissenters and those defending the right to think, live and love as they choose.

Thankfully, as you point out, you don’t have a role in making “a legal judgement about offense or freedom of speech.” If you did, you would have already imposed de facto blasphemy laws on those of us who have fled de jure blasphemy and apostasy laws which call for our murder.

You do, however, have the chance to do the right thing. Whether you do is another matter.

LETTER FROM PRIDE IN LONDON

Thank you very much for your email.

As you are aware, we have received a number of complaints regarding some of the placards your group chose to carry during the Pride in London parade.

At its heart, Pride is a movement of acceptance, diversity and unity – a safe place that celebrates difference and rejects intolerance.

Our parade has always been a home to protest, and not just to celebrate, which means we are used to seeing conflicting points of view. The tolerance, acceptance and recognition that we demand for ourselves as LGBT+ people, can only happen if we are also prepared to offer those whose opinions we don’t agree with the same courtesy.

However, this does not give people in our parade the freedom to ostracise, discriminate against or humiliate anyone else taking part. If any individual or any group does this, they undermine the very principles on which we exist.

Our code of conduct, which every group agreed to as part of taking part in the parade, is very clear on this matter. All volunteers, staff and parade groups agree that Pride celebrates diversity and will not tolerate any individual making derogatory remarks about a person’s sexuality, gender, gender identity, race, age, nationality, disability, appearance, religion or any other factor.

LGBT+ Muslims play a vital and important role in London and in Pride. We recognise that Lesbian, Gay, Bisexual and Transgender Muslims face discrimination on both sides, from people within their faith and also from within the LGBT+ community.

Over the years the parade has been a place of acceptance for LGBT+ Muslims and this year Imaan, the LGBT+ charity, was voted the winner of the best walking group in the parade for the diversity and passion they displayed. What’s more, this year we supported the ‘Big Gay Iftaar’ as part of the Pride in London festival. We also hosted a vibrant and positive discussion about Islam and the LGBT+ community on the faith episode of our Facebook Live series. This is part of our dedication to supporting the full spectrum of the LGBT+ community.

Equally, it is also very important that individuals who once did but no longer follow the Muslim faith have a welcome place in the Pride parade. We acknowledge the difficulties individuals leaving the faith can sometimes encounter and do not in anyway seek to diminish the significance of those experiences.

To specifically address the complaints we have received, we want to be clear that we do not feel it is our role to make a legal judgement about offense or freedom of speech. However, it is our role to determine if a group has broken our code of conduct and whether they can be permitted to march again in future parades.

It has been argued that some of the placards are a legitimate form of protest. However, there were some placards we feel may have the potential to breach our code of conduct. These placards may be seen to reject the existence of islamophobia, to make defamatory statements about a specific group of people, and overall could have been seen to proactively question the ability to be LGBT+ and Muslim.

We have referred these complaints to our Community Advisory Board, who assess every parade entry after each year and decide on which groups will be allowed to march again. This decision will be taken prior to the opening of parade entries in 2018. Both the CAB and Pride in London commit to ensuring you are able to engage fully in this discussion, and welcome the opportunity to meet with you to discuss further.

We believe Pride in London must continue to play a vital role in supporting LGBT+ Muslims, as well as those who have left the faith. We want to work with community groups and charities to further these efforts, and would encourage any organisation that can play a role in building a vital bridge to get involved.

We also want to thank you for any support you can provide in the fight against hatred and bigotry. We are eager to stand side-by-side with you in this battle, supporting any actions you take to support LGBT+ people, but we also feel that the LGBT+ community can equally do more to tackle hatred and bigotry in all its forms, especially Islamophobia.

Together, I hope we can build common ground to stand up for communities that are more harmonious and supportive, valuing all citizens, no matter their faith or sexuality. 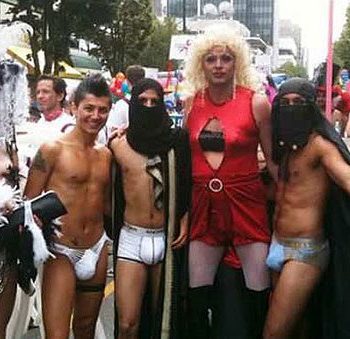