Below is my monthly column for The Freethinker entitled: Religion is fundamentally patriarchal and anti-woman, 25 May 2016

As US suffragette Elizabeth Cady Stanton once said:

You may go over the world and you will find that every form of religion which has breathed upon this earth has degraded woman.

In one Hadith, Mohammed, Islam’s prophet says: “I have left behind no fitnah more harmful to men, than women” (Al-Bukhari, Muslim). Hatred of women is a recurring theme in all major religions. There is a Jewish prayer recited by men that says: “Blessed are you, Lord, our God, ruler the universe who has not created me a woman”.

In the Bible it says: “A woman should learn in quietness and full submission. I do not permit a woman to teach or to have authority over a man; she must be quiet.” (1 Timothy 2:11-14) This is also evident in Hinduism, Buddhism …

For those who only see the surface, there is an apparent contradiction that is often not understood. On the one hand, Islamic law and states are the beginning of the end of women’s rights. A pillar of Islamist rule is the attempt to erase women from the public space. On the other hand, women are everywhere – making sure they are seen and heard.

This female presence is palpable in all areas, including against the veil, gender segregation, opposition to Sharia … The extent of control of women and their bodies is a measure of the power and influence of the Islamists just as the extent of women’s autonomy is a measure of the resistance against Islamism  but also Islam and religious “morality”.

Those only looking at the surface, see women’s active presence and resistance and wrongly credit Islam and Islamism. In Iran, for example, they credit the “reformist” faction of the Iranian regime. To me, it’s like crediting apartheid in South Africa for the black liberation movement or segregation in the US for the civil rights movement.

This absurdity is only possible today because of identity politics and cultural relativism, which no longer acknowledges citizens and human beings but homogenised religious identities that unsurprisingly coincide with the impositions of Islamists and the ruling class. This is why everything from gender segregation to the veil and Sharia are sanitised and legitimised at the expense of women’s rights. Only in a  world where identity politics and cultural relativism reign supreme can the likes of Islamic feminism be given any credence.

But in my opinion Islam can never be feminist.

In fact any positive change in women’s condition, is not thanks to Islamic laws, states or Islam but despite it. It’s in fact thanks to women’s resistance against Islam and Islamism.

Of course that is not to say that believing women, Muslim women, cannot be feminists. Of course they can – just as men can be feminists and women misogynists – but one can only be feminist if women’s emancipation trumps religion. Whilst people – even believers – can be feminists, religion cannot. Religion is fundamentally patriarchal and anti-woman.

“Islamic feminists” like Shirin Ebadi will say that women have full rights under Islam and if they don’t it is “not Islam at fault but patriarchal culture that uses interpretation to justify whatever it wants”.  Yet the Quran and Hadith are overflowing with anti-women rules and regulations. Stoning to death for adultery, for example, is in a Hadith, while wife beating is in the Quran. Islamic feminists will say the mistreatment of women is because of “bad” interpretations.

Take Sura al-Nisa (the women), [the fourth chapter] in the Quran 4:34, where it says: “As to those women on whose part ye fear disloyalty and ill-conduct, admonish them (first), (next), refuse to share their beds, (and last) beat them (lightly)  …”

“Islamic feminists” will say that men have been made to wait, are not obliged to beat their wives, and when they do, they must not leave marks and beat their wives with thin sticks …

These are the justifications of those who are more concerned with defending Islam than defending women’s rights.

From a women’s rights perspective, no woman should be beaten – “disobedient” or not.  Full stop. End of story.

If you want women’s liberation, you cannot leave women’s rights and lives at the mercy of religious rules and interpretations.

You have to choose – do you side with women’s rights or religion – you cannot defend both as they are antithetical to each other.

• The above is a shortened version of Maryam Namazie’s speech at the Founding Congress of Enlightenment Feminism in Sulaymaniyah, Kurdistan, where she spoke about Islam and Islamism as the greatest stumbling blocks for women’s emancipation and how Islamists target women and girls first – whether in Tehran, Peshawar or Manchester.

Islam and Islamism as the greatest stumbling blocks for women's emancipation 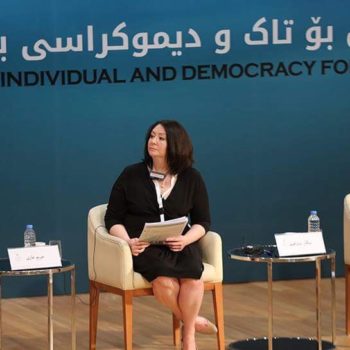