Sharia law is the same everywhere. Iran, Britain, Afghanistan, Saudi Arabia – that is if it’s Sharia.

And under Sharia law a woman’s testimony is worth half that of a man’s so you always need two women for every man, not just in financial transactions – as its proponents deceptively say (as if that’s not bad enough) – but in any matter of importance. We are told it’s because women are too ’emotional’, menstrual, or so that if one errs the other can remind her. It’s about the nature of women. But for those ‘heretics, communists, and other atheists’ who ridicule this, finally here’s the scientific proof that women cannot talk and remember at the same time:

Oh well, that settles that then. 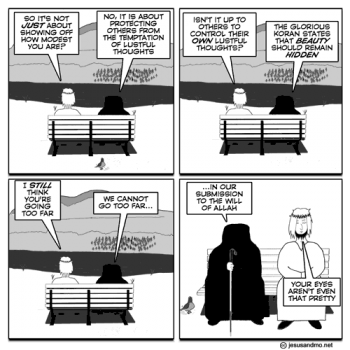