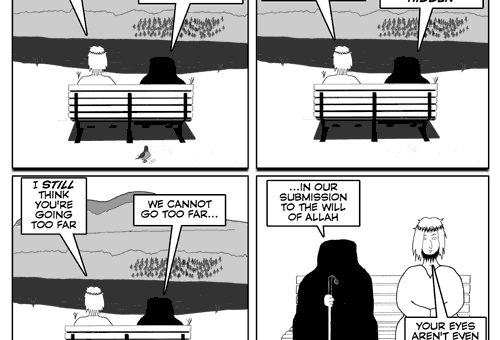 The UCL Atheist, Humanist and Secular Society (ASH) has published a report on the December event where Anne Marie Waters and I debated members of the Ahmadiyya Muslim Students Association on Sharia law. The debate can be seen here as can my blog entries on it here and here.

The report highlights an affliction that many humanist groups in particular, including student groups, have when it comes to dealing with Islamic groups.

The UCL ASH report’s unfortunate conclusion is a case in point. It says that apparently ‘the two sides of the motion maintained different concepts of ‘Sharia Law’, i.e. as it is practiced versus as it is truly described – which concept is the most relevant today is a question to brought forward’.

This affliction arises partly because of the gullibility of these groups. They believe Islamists at face value despite all evidence to the contrary and are keen to label anyone they can as a ‘moderate’. In that specific December debate on Sharia for example, when I spoke of the Hadith on stoning, the Ahmadiyya speaker said none existed in order to prove that his Islam was not the Islam being practiced in countries where stoning to death takes place. Immediately, this was seen as proof of there being ‘different concepts’ of Sharia law. But the speaker was lying and admitted as much. To those saying he should not have lied, the speaker Ayaaz Mahmood later commented: ‘Had Maryam asked me, “Has the Holy Prophet (sa) ever ordered that a man be stoned to death?” To this, I would have had to answer yes, and then hope and pray that the moderator would give me a minute or two (which isn’t really enough) to explain the whole background of those specific Ahadith… But of course, at the time, the opportunity did not afford itself to give this entire explanation. So I gave her the direct answer to her question, which was a big, “NO”. Only to silence her. Because I didn’t want to get into this whole issue during the debate…’

Ayaaz Mahmood did the same with the verse in the Koran on wife beating (he said it was not a beating as no marks could be left!) and on Aisha’s age (she was 18 according to him but still playing with dolls) and so on… Rather than seeing through this, the group sees the discrepancies as ‘different concepts’ of Islam.

The affliction also arises partly due to the hegemony of a ‘pragmatic’ approach in the Humanist movement that is keen on promoting inter-faith work and coalitions irrespective of their consequences and actually seems to prefer it especially since it opens a space for humanism on par with religions.

Which brings me back to the current censorship attempt on the UCL ASH for using a Jesus and Mo image on their Facebook page. The UCL ASH and the National Federation of Atheist, Humanist and Secular Student Societies (AHS) insist that this has nothing to do with the Ahmadiyya Association. I am not so sure, particularly since this fiasco quickly follows a heated debate on Sharia law. And whilst the ASH has been insistent that the Ahmadiyya Association finds the publication of the image within its legal rights, the Ahmadiyya Association treasurer has also said that the Union might be within its legal rights to ask for the removal of the image… See the doublespeak?

Now put this incident within the context of the rise of extremism at universities and in many cities across Britain, the threats received for putting on debates deemed offensive by Islamists (I have had quite of few of my own events cancelled or seen organisers’ threatened), the increasing use of ‘offence’ to create a climate of censorship or self-censorship and the seriousness of the matter become clear.

Despite this, Michael Paynter, the Secretary for the National Federation of Atheist, Humanist and Secular Student Societies had written to the Ahmadiyya Association blaming Alex Gabriel (who highlighted the matter in the blogosphere) for writing ‘particularly inflammatory articles about the situation, exaggerating it beyond its actual scope’ and goes on to say that ‘Alex Gabriel is neither a member of UCLUASHS and is not even a student at UCL and [they] do not support his distorted view of the situation. The publicity that has been manufactured in the blogosphere is entirely down to him and not members of UCLUASHS.’ As if any of this is relevant to matters of free speech and expression.

Whilst this may be an exercise in pragmatism and PR for the National Federation of Student Societies, free expression goes to the heart of the matter for many of us who are fighting Islamism and sharia law. It is very often the only tool available to us so please do us a favour and don’t barter it away.

Needless to say, there are many brave people in the Atheist, Secularist and Humanist movement standing up to the far-Right (including Islamism), Sharia law, the burqa, inequalities, forced marriages, honour killings and the rights of ex-Muslims and Muslims to equality and one secular law for all. It is these very people that must continue to come to the fore to defend free expression before it’s too late.

Not an urban legend to 'thigh' babies