I’m writing to inform you of the establishment of the Committee for Solidarity with the Iranian Workers’ Movement, a new campaign founded by a range of Iranian and Kurdish socialist and feminist activists, with support from ourselves and others in the British labour movement.

Our movement at its best has always been radically internationalist, organising solidarity and practical support for workers’ and democratic struggles around the world. The workers, women, and youth of Iran, in struggle against theocratic oppression, and for freedom and equality, need our solidarity now.

We hope you will consider joining us in this effort. The campaign can provide speakers for meetings as requested. Please also find attached a model motion for union bodies.

SOLIDARITY WITH WORKERS, WOMEN, AND YOUTH IN IRAN: MODEL MOTION

This [branch/committee/other body] notes the ongoing revolutionary uprising in Iran, spearheaded by women and young people. Sparked by protests against the death of Mahsa Amini, the uprising foregrounds issues of women’s rights and opposition to gender apartheid, but also raises issues of social freedom and equality, with people demanding the right to democratically determine their future through their own councils and direct representatives.

This [body] further notes the workers’ protests and strikes, involving teachers; nurses; oil, gas and petrochemical workers; steel workers; Haft Tapeh sugar cane workers, and many others. Despite decades of repression, war, and bearing the brunt of economic sanctions, workers in Iran have continued their tradition of militant action and struggled for recognition of the right to form their own independent organisations and to strike.

This [body] further notes the recent establishment of the Committee for Solidarity with the Iranian Workers’ Movement, chaired by John McDonnell MP.

This [body] believes international solidarity with all working-class and democratic struggles for freedom is a core labour movement principle, and supports the struggles of Iran’s workers, women, and youth against the Islamic Republic.

This [body] in support of the workers’ movement in Iran therefore resolves:

– To support work of the Committee for Solidarity with the Iranian Workers’ Movement, circulate its materials to members, and invite a speaker from the committee to a future meeting
– To promote local mobilisations in support of the uprising in Iran to members, and organise a distinct, visible trade union presence on such mobilisations
– To submit this motion to [relevant higher/national body within union] to mobilise support at [regional/national] level
– To specifically support workers’ struggles in our sector in Iran, and aim to make direct links with the workers involved if possible
– To request that the national union audits whether we organise workers at companies or in supply chains that have economic interests in Iran or ties to the Islamic Republic, to establish whether action by our members could directly aid workers’ struggles in Iran
– To condemn the arrest of protestors, and the executions of Mohsen Shekari and Majidreza Rahnavard and other imminent executions. 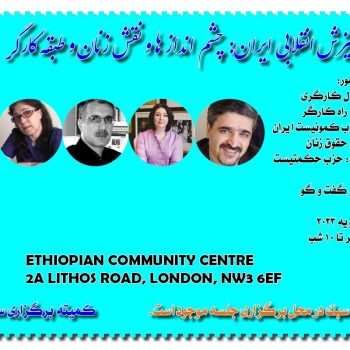