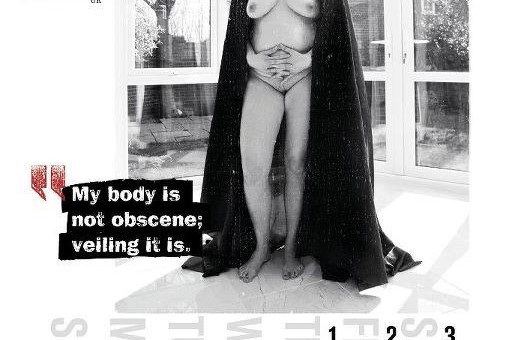 Azar Majedi of the Organisation of Women’s Liberation in Iran has just published a piece in Persian attacking the Nude Revolutionary Calendar and the video of Iranian women supporting it as ‘absurd caricatures’ of Aliaa Magda Elmahdy and Golshifteh Farhani’s nudity and attempts at ‘self-promotion’, ‘dim-witted idiocy’ and acts of ‘buffoonery’. She likens the Calendar to the tabloids (like the Sun) which use women’s nudity to increase profit and says the calendar defends rights no more than the tabloids do. Moreover, she says nudity in the west takes no courage at all.

What Azar doesn’t see is that nudity is not the problem; it’s the commodification and objectification of women’s bodies that are. To see the Nude Photo Revolutionary Calendar of women showing solidarity with a young Egyptian woman under attack as one and the same as a tabloid that sells dehumanised women’s bodies for profit misses entirely the point of the Calendar and for that matter Aliaa’s own actions. The Calendar is an organised act by women themselves reclaiming a tool used for suppression. It may not be considered courageous by Azar but nudity in this manner is not as easy as it may seem.

It’s interesting how nudity outrages so many people – including Azar. This is partly because of the internalisation of society’s image of women’s bodies as something obscene that sells papers. Whilst Islamists often portray their vile politics as a prescription for the debasement of women in western societies, their image of women is very much the same and it is these viewpoints that have coloured much of the perceptions of nudity.

Also the closer to ‘home’ the nudity is the more uncomfortable it feels. Aliaa was blamed for tarnishing the Egyptian revolution, Golshifteh for embarrassing an entire nation, and I and the Iranian women in the supporting video for doing what ‘Iranians’ but also ‘communists’ should not be doing.

Certainly nudity is not the only way to resist but it is a very modern way of challenging Islamism and the veil. Islamists want us covered up, hidden, and not seen and not heard; we refuse to comply.

The implications of this calendar for the advancement of women’s rights and freedoms are very real though Azar belittles it by saying that not all taboo-breaking initiatives are progressive. Maybe not; but when women’s bodies are under such sustained attacks, nudity in this form is liberating and challenges the status quo.

Azar says that our actions are irrelevant as the photos were taken in the west and because we do not face the same threats Aliaa does – but these are all secondary. One does not have to live in the Middle East and North Africa to feel the threats of Islamism but nonetheless, threats or no threats, in Egypt or not, isn’t this the whole point of international solidarity?

By the way, as an aside, it seems Azar always says such things in Persian where she can find buyers amongst the religious-nationalists she claims to oppose…

Iranian women in support of the Nude Photo Revolutionary Calendar