To those that continue to blame the patriarchy, move on

To those that continue to blame the patriarchy, move on

Sonya JF Barnett, the co-founder of SlutWalk and the designer of the Nude Photo Revolutionary Calendar has a brilliant piece on the calendar here.

I’ve gotten incredibly tired of people blaming everything I do on my gullible acceptance of “The Patriarchy”.

She goes on to say about the Nude Photo Revolutionary Calendar:

Created in homage and support of Egyptian blogger Aliaa Elmahdy, who posted a nude photo of herself as a ‘scream’ against the misogyny and hypocrisy in today’s society. She didn’t post it so she could titillate; she posted it because she knows that her body is hers and she should be able to do whatever the fuck she wants with it. She’s also not so naive to think that some people will look at it and assume that showing off your nude body is nothing but to titillate, but she didn’t do it for them. She did it for herself.

I’m part of this calendar. Not only am I one of the submissions, but I also designed it. I offered my assistance to the creator, Maryam Namazie, who is an Iranian Human Rights Activist based in the UK. We, along with the other women in the Calendar, are not of the mind that you can only look upon a nude woman with nothing but the male gaze. We created the Calendar for us and people like us who can look upon a woman and appreciate her for more than the sum of her parts. When I look upon the faces of these women, I don’t think that they’ve cheapened themselves and gone the easy route {to all those who say that it’s easy to take your clothes off and post it to the world: you try it}. I see activists, writers, mothers, feminists. If there are any feelings of an empowered sexuality in there, then they are just as legitimate. I can appreciate a nude woman for her mind as much as her sexuality, and I’ll never let anyone tell me that doing so is feeding into the Patriarchy. Yes, the calendar shows breasts and vaginas and bums, but I see them as things of beauty, things to be admired, celebrated, respected. Not things that are pornographic, or to be taken or to be reviled.

If you can’t get past the idea that a woman’s self expression can include her own body and her pride in it, then it’s you that needs to get past the patriarchy, not us who have already tossed it aside and moved on.

And you know who you are.

We must defend free expression to fight Islamism and sharia 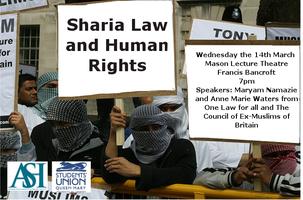