A statement defending freedom of expression and the right to criticise Islam was published in today’s LIBERATION.

Below is the English translation.

A corner-stone of our democracy – the freedom of expression and its corollary, the freedom to criticise – is seriously challenged on behalf of a falsified vision of the fight against racism, which equates criticism of Islam to a form of racism qualified as ‘Islamophobia’. This ideological positioning based on a semantic scam contributes to imposing the idea that freedom of expression is subordinate to the dictates of religion in general and of Islam in particular.
On several occasions in recent years, democracies have recalled that freedom of expression is an inalienable right. Yet today, a number of thinkers, intellectuals, writers, journalists and feminist and secular militants are subjects to severe persecution and even death threats because of their determination to exercise this right. This trend takes a dramatic turn with regards to the so-called Muslim world where the separation of political, religious and judicial powers is a fundamental issue that, at the present time, is a fight between the democrats versus the Islamists and authoritarian or dictatorial regimes.

With the publication of “The Satanic Verses” by Salman Rushdie on 14 February 1989, the opposition to freedom of expression took a more terrifying turn on the European stage: Ayatollah Khomeini’s call to kill the Anglo-Indian writer accused of blasphemy. From then on, the strategy of Islamists has been to eliminate their opponents by any means. It is in this context that we must place the sentencing to death of Taslima Nasreen (1993), the murder of Theo van Gogh (2004), attempted murder of the Danish cartoonist Kurt Westergaard, as well as the killings in Charlie Hebdo on 7 January 2015.
Political Islam clearly claims legitimacy in killing free spirits. Their elimination is well organised on several levels. The legal field is one and it is not the least. Lawsuits against secular and feminist activists are now brought under false pretences. This new strategy which is akin to a “legal war” visibly takes place to muzzle anyone who uses his or her freedom of speech to criticise radical Islam and to test resistance of “targets” and institutions. In France, the Charlie Hebdo cartoons’ trial predated the terrifying scenario. The trial against the Baby Loup nursery with its countless judicial twists ended with a victory of the nursery Director Natalia Baleato but it was done at the price of a long fight.
In Quebec, Djemila Benhabib, journalist and essayist, well known for her fight against political Islam, is already facing her second trial. In 2012 she was pursued by a Muslim mother for having published on a blog the pictures of her two children taken during a Koranic recitation contest organised at the mosque al-Rawdah, a stronghold of the Muslim Brotherhood. However, these same photos had already been published on the site of the mosque. Djemila Benhabib won the trial without but at moral and financial cost. On 26 September, another trial will open in Montreal because of Djemila Benhabib’s opposition to an Islamic school (financed by the Ministry of Education) where the compulsory wearing of the Islamic veil is imposed from the third year of study (that is on 9 years old girls). In the United Kingdom, the feminist activist Maryam Namazie who leads the fight against Sharia courts faces lobbies organised within University campuses. Their representatives disturb her lectures and attempt to prevent her from exercising her right to speak freely in defence of women’s rights and the principle of one law for all. This unbearable harassment always involves presenting activists as racists.

Let us make no mistake on the real motives of the perpetrators of these attacks. First, it is to spread fear against any critical expression against Islam or against the misguided way in which some want to impose it on others. Then, comes a disproportionate pressure on targeted persons to exhaust them psychologically and financially; to ostracise and eliminate them from public debate. In short, it is to discourage them from speaking publicly. This is why we strongly reaffirm that democrats around the world must refuse the policy of fear and intimidation. There is no question of renouncing freedom of expression, no more than the universality of human rights and of women rights in particular, that must not suffer restrictions on behalf of religious precepts or cultural pretexts. Let’s gather our forces and act collectively. This is the first objective of the Support Committee that just has been formed. 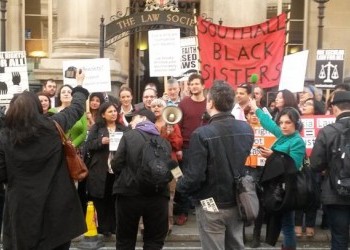