I met Maryam Namazie at the Celebrating Dissent festival in Amsterdam recently. As co-organiser of this unique gathering, it soon became clear that Maryam was seen by many of the participants as something of a mentor, even a mother figure. A veteran campaigner for human, especially women’s rights, Maryam, now 53, speaks with the eloquence and quiet confidence that comes with years of sustained activism on issues ranging from Islamophobia, to blasphemy, misogyny and sex apartheid. Maryam’s well-modulated voice and pleasant demeanour, belie a tireless determination to protect and advance the rights of others.

Born into a largely secular family in Tehran, her family were forced to flee the country in 1980 when Maryam was just thirteen. In the wake of the Iranian Revolution (1979), she and her mother had left Iran for India, where Maryam was to attend school. Namazie’s mother was set to return to her husband and younger daughter in Iran when word came from her husband to stay in India with Maryam. Some months later they were joined in India by her father and younger sister. ‘It was not supposed to be final. So that’s what’s heart-breaking for me’ Maryam explains.

‘At the time, I didn’t think I would never go back, never say good-bye to my friends, my grandmother, never see my home again…’. Maryam and her family were not allowed to stay in India, so they went to Britain where they remained for a year before having to leave again. Finally, they travelled to the US where two of Maryam’s uncles had already settled. Although their passports were confiscated upon arrival in the country, seventeen year old Maryam and her family managed to stay there. This is where she completed her education and began her work as an activist.

‘The future revolution of Iran is clearly a female one’ – Namazie

Maryam Namazie explains that her politics was shaped by the Iranian revolution and by worker-communism. ‘To me, that revolution is unfinished. The future revolution of Iran is clearly a female one.’  She became an activist as a result of her own life experiences. As a young immigrant in the US, she worked at McDonald’s while her father, who had been a journalist in Iran, worked as a courier and a security guard, anything to make ends meet. ‘One feels sorry for the older generation’ Maryam tells us, ‘because they gave up everything for us and then we go ahead and become blasphemers and apostates!’. This last comment is made in jest as are a number of other stories of her family and childhood.

Namazie tells us about her great grandfather who was a Mullah. In his picture, he ‘looked like the Taliban, but even scarier!’. Her grandfather was an Islamic scholar who taught Arabic at a university in Calcutta and led inter-faith prayers, including non-Muslims. He did not insist that his wife or daughters wear the veil. Her own father was brought up in a strictly Muslim manner – no alcohol or pork, prayers five times a day. But again, Maryam explains how her father has been one of her staunchest supporters in her role as an activist. Although she was born a Muslim, Namazie has never read the Quran nor entered a mosque in Iran. ‘Religion was never imposed upon me until the Islamic regime of Iran came to power’ she explains. It was at this time, that she realised how destructive it is as a method of governance.

Maryam Namazie’s light-hearted description of her life as a young immigrant in the United States belies what she later admits was ‘the trauma of losing everything and starting all over again’. After finishing her studies in the US, the young Maryam worked with Ethiopian refugees in Sudan. However, she returned to the US after the newly established Islamic state discovered she had begun a clandestine organisation called Human Rights without Frontiers. She was threatened and forced to leave Sudan in 1990. The more refugee work she did, the more Maryam began to question why so many fled from Islamic states. ‘There’s a reason why women don’t want to live in an Islamic state, why gay people don’t want to live in an Islamic state, why young people don’t want to live there. Because everything is controlled and restricted.’ Back in the US, she co-founded the Committee for Humanitarian Assistance to Iranian Refugees. She travelled to Turkey in 1994 to work in Iranian refugee camps there. Namazie was then elected Executive Director of the International Federation of Iranian Refugees.

‘Islam, like any other belief system, has to be open to criticism’ – Namazie

Maryam Namazie’s leadership skills are quickly noticeable and stem from a combination of confidence and an abiding concern for others. During the short time I spent with her at the festival in Amsterdam, it is soon clear that taking responsibility is as natural as breathing for Maryam. This must have been both a blessing and a burden as she began her tireless battle as activist, commentator, broadcaster and spokesperson. She admits however that she has always enjoyed the support of her family. ‘That’s why it’s been easy for me to be an activist. Also, my partner is an activist. I’ve really always had a lot of support.’ As an atheist and spokesperson for the Council of Ex-Muslims of Britain, One Law for All and Fitnah – Movement for Women’s Liberation, Namazie defends the rights of those who leave and/or criticize Islam. ‘Islam, like any other belief system, has to be open to criticism’ she maintains calmly.

For Namazie then, the separation of religion and state is fundamental. She is unequivocal in her denouncement of Islam as a far-right movement. For her there is no difference between the fascism of white nationalist movements and the Islamists. She points out that religion is a key factor shared by the fundamentalists. White nationalists use Christianity – groups like the Ku Klux clan see themselves as Christian knights. While the Islamists rely on Islam to control and stifle dissent. ‘Religion is a very useful tool to control people’. This is why Maryam Namazie insists on the importance of celebrating dissent. ‘We don’t celebrate dissent enough, often we vilify and demean it.’ The rise of what she terms ‘the religious-right’ has ‘opened up a space’ for reactionary control and the repeal of women’s and minority rights everywhere. Nowhere is this more obvious than the rolling back of abortion rights in the US. c

‘Why are human rights only for white people?’ – Namazie

The activist understands that she will always be a target for Islamists and the far-right. But her real concern is what she calls ‘good people’s’ difficulty in seeing Islam as part of this far-right movement. She draws our attention to a preference to view Muslims in the West as a minority group that requires protection.  Yet it is more complicated than this. Namazie argues that as soon as dissenters within homogenised groups start speaking up and demanding equal rights of the kind enjoyed in the West, by Westerners, support for them diminishes. ‘They only like us if we’re quiet, submissive, if they can paternalistically protect and save us. But not if we go too far and stand up for ourselves’. Namazie tells me about experiences she has had with both the press (the BBC and Guardian) and some of the UK’s leading universities. Many universities no longer invite her to speak as she is seen as a ‘security risk.’ Although ‘one hasn’t done anything wrong’, this sort of ‘victim blaming’ as the activist calls it, means that ‘the bullies win’.

Namazie’s frustration is evident when she says, ‘What is really painful, is when you’ve got people who should be on your side, standing with you, stabbing you in the back.’ This brings her to the issue of Islamophobia. She fights against those who attempt to define it as a form of racism. Quoting the All-Party Parliamentary Group on British Muslim’s definition of the term, she questions the notion of ‘expressions of Muslimness’. She sees little difference between this and ‘expressions of Britishness’ that underpin xenophobic movements such as Britain First and UKIP. Movements which have, ultimately, fed into Brexit. Such definitions of Islamophobia certainly work to limit criticism of Islam and Islamism in the West. Maryam Namazie herself has been barred from Warwick University, harassed by Islamic Society students at Goldsmiths, and had her talk cancelled at Trinity College over the same accusations. Yet she is undeterred. Her work with the One Law for All organisation in the UK highlights the unequal treatment of minority groups who are ‘pushed towards religious courts’ under the guise of tolerance.

Maryam Namazie returns more than once to the issue of identity politics. Particularly, how it has worked to further divide people who should be standing together to fight for universal human rights. ‘People think that human rights are Western – and are associated in some cases with neo-colonialism. But for us, human rights are universal. For Namazie, the rise of the far-right in Europe is particularly worrying. Islamism and fascism are one and the same. ‘The battle against white nationalism is similar to the battle against Islamism’. From such a perspective, Namazie describes Brexit as ‘very dangerous’ as it is ‘fundamentally based on the hatred of the other’. This human rights activist is clear, ‘We’re going to need to wake up and fight against all forms of fascism.’

The close relationship between identity politics and religion is particularly dangerous for women and minority groups like LGBT. When asked about veiling and the anti-veiling protests that have gained ground in her native Iran, Maryam Namazie is unequivocal in her response. Women may submit to wearing the veil, or comply with veiling regulations but take away the climate of intimidation, violence and fear and see how many will really choose to do so. There may, of course, be some women who choose to wear the veil, just as there  are some women who choose to stay in violent relationships. But this doesn’t mean we should not be able to have open, frank discussions about these issues’.

‘Religion kills and should, like cigarettes, come with a health warning’. – Namazie

Maryam Namazie has dedicated her life to the protection and extension of universal human rights. She sees all forms of organised religion as a threat to such rights and is unequivocal in her position.  ‘Religion kills and should, like cigarettes, come with a health warning’. As with many apostates and blasphemers before her, Namazie faces opposition on many fronts. She admits that ‘sometimes, we feel like we’re the only ones fighting’. It is clear from the short time I spent with them in Amsterdam that this group of secularists and free thinkers are deeply supportive of one another. Although many of them are separated geographically, culturally and even professionally, they are united in their common commitment to universal human rights and an end to what they see as the tyranny of religion.

‘Obedient women never make history – but we intend to.’ – Namazie

Maryam agrees that the internet and social media have been a huge source of support for them and that they could never have made the kind of progress they have done, without it. She also points out that ‘social media and the internet are doing to Islam what the printing press did to Christianity’. Her faith in governments as agents of change is limited. ‘I think any real social or political change in any society, has come about by people pushing for it, to the point where governments are forced to back down.’ Maryam Namazie practices what she preaches. ‘Obedient women never make history – but we intend to.’ 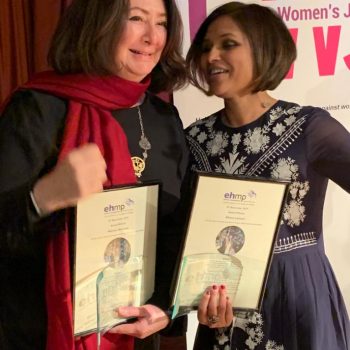